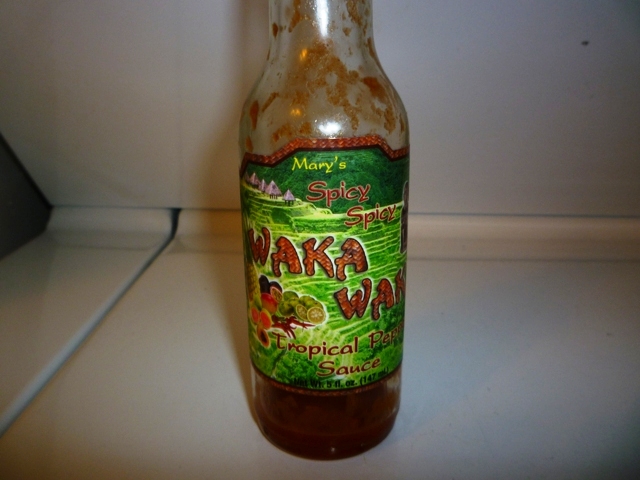 Mary’s Spicy Spicy WAKA WAKA Tropical Pepper Sauce is a very long name, so for now we will call it Waka Waka for short. I love that part of the name anyway, and it is something to remember. Fozzie the Bear used to say it all the time in the Muppet Show, and Pacman used to eat up the dots on the video screen to the waka waka munching sound. It was also the Official 2010 FIFA song and dance by Shakira which translated means “Do it”. Other online definitions I found were a Japanese poem and in New Zealand it is
1. a Māori canoe, usually made from a tree trunk
2. a tribal group claiming descent from the first Māori settlers in New Zealand

I can not find another meaning online, so I am not sure what it translates to in the Philippines, as it seems to be the inspiration for Mary’s sauce. No matter what, I love the memorable name, Waka Waka. What it comes down to is this, Chuck Evans wanted to dedicate a new line of products to his lovely lady friend Mary. It is still part of the infamous Montezuma Brand, and the new inspired lineup also has Mary’s Flaming Dragon Asian Flavor Super Sauce which we reviewed last time to really positive reviews. With all that said, does Waka Waka live up to the playfulness of the name and be as good as it’s Sister Asian sauce? Firehead Thomas and I unveil the mystery for you now in our video review.