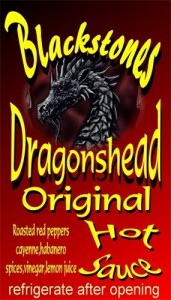 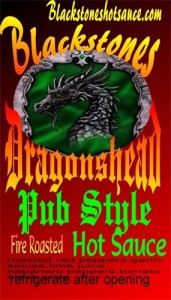 The Machine is doing a solo review for 3 Blackstone hot sauces. The first two are the Original Dragonshead and the other is the Pub Style version. The 3rd, Vicious Vixen, will be posted in a week. Here is a little background from Blackstone owner, Jon Smith:

So where do I begin? Well, everything for me started when the recession hit, and I was forced out of the job I had for years. Hooray for cutbacks and downsizing. Yet on the brighter side of the street to coin a phrase, was one of the best turns in my life.
After a few weeks of trying to figure out what to do in a collapsing economy, and having no immediate prospects, I was a bit lost. Then one day not so different from any other, my 10 year old son comes to me and says that he wants us to compete in a Father and Son chili contest. Well long story short, we Win! Can you imagine that? Doors open, flood gates burst, and we are off to the show. Well after a couple of chili cook-offs and not much further success, and lots of money flying out the door I took a step back and tried to re-evaluate our new found passion.

After some deliberation on the subject, I realized that pot after pot of chili I needed something to offset the cost of the ever increasing chili cook-off price tag. The natural coarse of thinking was to maybe have something a little extra for my chili to make me stand out. HOT SAUCE was my brilliant idea! After about 6 months of research and trial and error, and an endless stream of guinea pig volunteers, came the birth of Dragonshead Hot Sauce.

Dragonshead was made to compliment my chili, but deserved so much more. After a few suggestions to bottle it, I decided to try. A few labeling ideas later, and a couple of recipe fixes and some technique adjustments we think we have got it pretty close. I am not one to sit around being idle though. I do have quite a wonderful imagination for things, and before I know it, along comes Dragonshead Pub Style. Italian restaurants, and less than reputable, but often frequented, English styled pubs gave birth to this new sauce with a warm tomato base and a fiery kick from the Dragon. Think of a warm Brushetta bread (a local favorite of garlic bread with tomatoes and cheese) infused with a little Evil.

In short, the value of flavor or more importantly unique flavor is of the highest importance to me. Whether savory or sweet the flavor must ooze with a uniquely original taste profile.