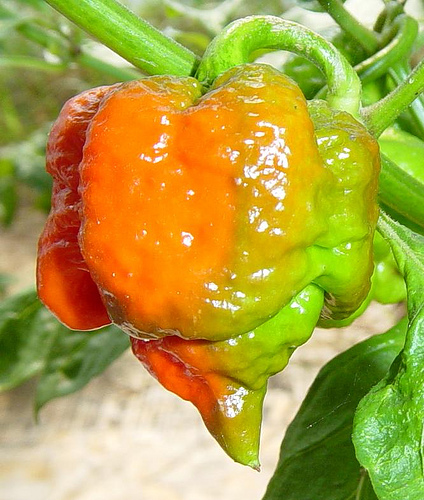 Before I met Butch Taylor aka Butch T aka tigerb8, which I will get to soon enough, he answered my plea about the Trinidad Scorpion seeds I was trying to get on the Garden Web Forum back in January 2008. He told me under his tigerb8 persona on the forum that he could send me some scorpion seeds if I wanted some. It was the way most of the people on the forum, freely exchanged or traded pepper seeds to those that needed some. Friendly group they were. He actually told me later that he was out of extra seeds, but he had some 7 Pot seeds instead that were as equally painful. It was better than nothing, I thanked him and gave them to a friend to grow for me, only to be flooded away a few weeks later in a bad storm.

Fast forward 3 1/2 years, and suddenly in Australia, the Hippy Seed Company announced they had the hottest pepper in the world from a test they did to find out the Scoville rating of said pepper. For those not in the know, the scoville rating is what is used to determine the heat of the pepper. Neil owner of Hippy Seed names it “Butch T” after Butch Taylor who donated the seeds to him. Now that is all well and good, but where did Butch get these pepper seeds from? Butch told me he got them from a seed bank from the same Garden Web Forum that I originally crossed paths with him. A seed bank he told me was a place where people donated chile pepper seeds and took what they needed in return. Mark from NJ known as Groovy1 on that garden forum was the guy behind the seed according to Butch.

Groovy1 was easy to find in the forum’s member search engine, and then I found was able to track down some personal information that later allowed me to garner his email address. Once I had that I reached out to him hoping he would respond. It didn’t take more than a day before he got back to me. He was thrilled that I did. Here was his exact words when I asked him about Butch’s seed donation and where he got the seeds from:

Thanks for getting in touch with me. It’s been a while since I’ve been on GardenWeb! Yes I do remember how I came across those seeds. Years ago I made a seed trade with someone and I forget what I sent them but they offered to send me seeds for a pepper that they had gotten at a nursery in Maryland. They claimed it to be the world’s hottest pepper, but I admit that I was somewhat skeptical. I had been informed plenty of times in the past that I was about to try the world’s hottest pepper but I hadn’t found any past the Fatali and Chocolate Habs. Anyway, long story short, I grew them and bit right into the first ripe one that I had in the garden and I nearly jumped right over the fence without touching it. Unbelievable. I wrote a long post on GardenWeb with the hypothesis that the Trinidad Scorpion and the Bhut/Bih Jolokia were strains of the same pepper, but I have no empirical evidence to back that up. I believe that it happened during the movement between India and Trinidad of spices, people, etc. Nice to hear from you! Which blog, by the way?

After a few more email exchanges with Mark, he found out that the seeds he received came from the Valley View Farms Garden Center & Nursery in Cockeysville, MD. The question next was how did they acquire the seeds? That my friends is where our story continues in the video. I want to introduce you to Carrie and Kathy of Valley View Farms.

Moruga is not just a very hot pepper, its a place