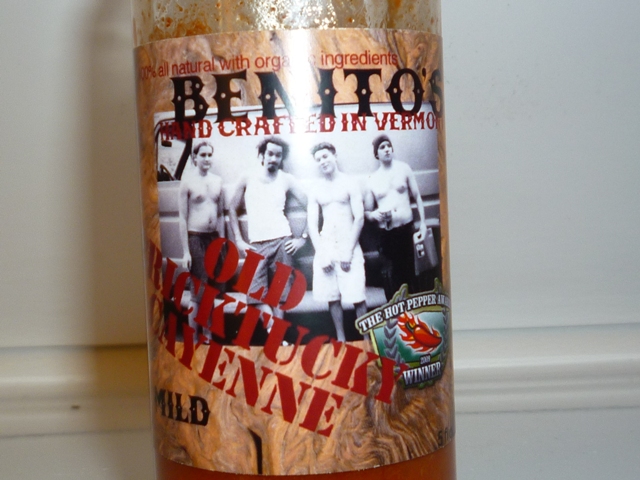 This is a 1 person review for Benito’s attempt to put a spin on the traditional cayenne pepper sauces by adding cinnamon into the mix. Benito’s sauce line is known for his 100% all natural organic spicy products. There are not too many organic hot sauces out there because of the cost it takes to make them, so if you are interested in staying organic you might want to look into Benito for your spicy love. We have done other reviews with Benito which you can check out HERE.

Here is a little history from Ol’ Benito himself:

It all started back in 2004 while I was working as a waiter at Mexicali Rose restaurant in Montclair, NJ. Putting the house hot sauce on my burritos, soft tacos, and chimichangas, became a daily lunchtime ritual. The sauce that they bought for the restaurant was quite good, with just the right mixture of citrus and vinegar. However, it lacked something that I was beginning to crave at the time ….HEAT!
bus-pic_0.jpg

After trying some more popular sauces such as Dave’s Insanity Sauce, Blair’s Death Sauce, and the ever so famous Frank’s Red Hot Sauce, I began experimenting in my kitchen at home. At the time I had a large supply of organic cayenne and jalapeno peppers from my organic garden behind the house that I was renting with a few friends. At first, I simply looked online for hot sauce recipes. I came across a rather generic recipe for a jalapeno pepper sauce. I followed the steps outlined in the recipe but threw in some cayenne peppers as well as jalapenos and other ingredients. After a few trial runs I thought I had perfected the ultimate balance of flavor and fire and thus, a delectable addiction was born. In the beginning I just slapped a hand written label on it and called it “Benito’s Orange Pepper Sauce” . Friends and family started to really dig it and I began to receive a lot of feedback as well as recipe ideas.

Eventually, once people’s interest in the sauce began to increase, I began to pump up the volume and I renamed the organic hot sauce “Benito’s Naranja”. I formed an LLC (Benito’s Hot Sauce) and approached an old friend, Steve Connelly (owner of the Laughing Burrito). Steve agreed to let me make the sauce at his restaurant which is now located on Bloomfield ave in Caldwell,NJ (same building as Otto’s Pizzeria).

In July of 2008 I permanently relocated to the beautiful Green Mountains of Vermont. I began cooking and bottling the sauce at the Vermont Food Venture Center in Fairfax, Vermont in the Fall of 2008. I am currently preparing and bottling my sauces at New World Enterprises in Winooski, VT. I chose to move to Vermont because of a statewide emphasis on the importance of locally made products and supporting the local economy along with the State’s commitment to sustainable organic agriculture.

Over the last few years, I have come up with five new sauces, two BBQ rubs and two chile pepper infused maple syrups. , I wanted to incorporate a range of heat levels with various flavor schemes. The Naranja is more for the hot sauce enthusiast, (it is now made with organic orange habaneros), It is quite hot and goes well on anything. The jalapa has a jalapeno/cilantro/ lime flavor (great on Mexican food). The Bricktucky has a very distinct sweet cinnamon cayenne flavor. The Mango is your classic summertime sweet-hot. Lastly, the White Hot which is nicknamed “the guido killer” is a concentrated habanero-based torture trip.

All sauces are made with all natural and organic ingredients. I don’t use nonsense filler ingredients like xanthum gum, pepper mash, salt, sugar, flour, corn syrup, or any artificial flavors or preservatives. Our products are 100% sodium free. I also make all of my sauces in small batches, we do not us contract packers for the sake of quality control issues.

Ultimately, the purpose of what we do at Benito’s is not about name recognition. I have no desire to become the next tabasco sauce. We are simply about producing a unique product that is always made with fresh organic and all-natural ingredients. I love to hear that people are experimenting with our sauces and learning more about sustainable organic horticulture.