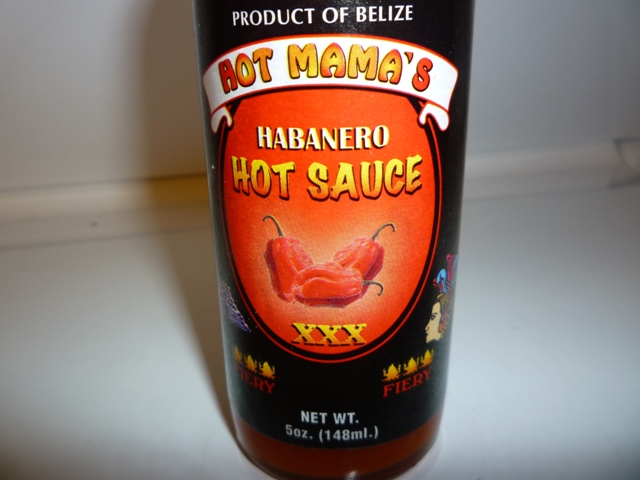 I think this is the first official review we have done from the country of Belize. I tried their products over the years at the Fiery Food Show in Albuddahquerque, but never with food before. They sent us two from their product line to review. First this basic habanero carrot blend and the other is their Sweet Heat which we will post next week. For this review besides myself we also have The Machine and Ken Alexander to give their breakdown on these products. Here is a little background from Hot Mama’s:

It all started back in Texas in 1996, when Howard and Wilana Oldham decided to relocate to Wilana’s home country, Belize. Wilana is a 3rd generation Belizean and Howard, an American investor who had fallen in love with the country. At the time of their decision making, they had one idea and that was to produce habanero pepper jelly from a recipe handed down through Wilana’s family. While in the initial stages of jelly production, they became aware of the high demand for fresh habaneros and decided to export a few pounds of fresh peppers. A few pounds quickly grew into thousands of pounds and an average year was around 100,000 pounds with the highest being 250,000 pounds. After 7 years, the Oldhams felt that it was time to make a change and started focusing on making sauces from peppers they did not export.

The idea had always been that they would eventually venture into making different types of hot sauce, utilizing the abundance of fresh fruits that flourish in Belize. Wilana started experimenting in her kitchen and Manganero (a mango and habanero pepper sauce) was their first gourmet sauce. Howard had already created the name long before they had even moved to Belize, but now they had the recipe to go with the name. At first, they only gave it to some family and friends, but it was quickly realized that this was a very unique sauce and a very good sauce, at that. This sauce was unique because it is a hot sauce, tempered somewhat by the sweetness of the mango. Wilana felt that there could be other people like herself who would like something hot and sweet, and not just hot.

One day, while working in the kitchen, she experienced some difficulty with one of the products. Not wanting to abandon the recipe, a suggestion was made by Howard “Why don’t you put the stuff in a 10 oz bottle and call it ‘Sweet Pepper Sauce’?”. The Sweet Pepper Sauce is now their number one selling sauce. Once again, they had created a sweet hot sauce that could be eaten with just about everything and one that everybody loves.

In addition to these two gourmet sauces, they also make different heat levels of hot sauce and a barbecue sauce that goes well with meats.

With the addition of an apiary, Hot Mama’s also produces pure and clear honey, branded Orange Blossom Honey – straight from the hives.

In July of 2005, applications were submitted to the United States Food and Drug Administration in Washington DC and by November of 2005, approval was given to Hot Mama’s to ship 6 of their products into the US.

Hot Mama’s is a registered brand name under which they market all their products; its office is located at Pepperland Farm which nestles among the rolling hills of Unitedville Village in the Cayo District on the Western Highway at mile 58-1/2, approximately halfway between the Capital City of Belmopan and San Ignacio Town. Presently, it is just a very small kitchen, but it bustles daily with vibrant activity. Howard and Wilana anticipate expanding the kitchen facilities in the near future as demand for Hot Mama’s products increases both domestically and in the North American marketplace.

Buddah takes on Torchbearer’s The Rapture