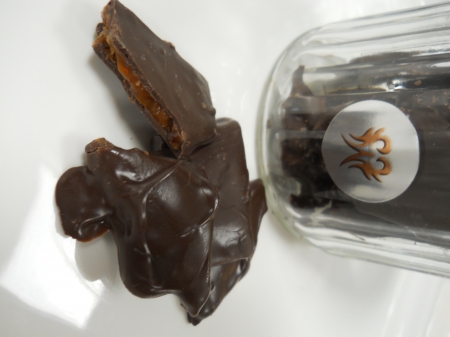 Ricky Sanders joined the Facebook Chileheads group and made an immediate splash with his spicy chocolate offerings. I was intrigue enough after scoping out some of the different blends of sugary confections and placed an order. One of the things Ricky wanted me to try was the Sweet Burn Butter Toffee with the ghost pepper and bacon blend. It was spicy and D-licious. Some of the best toffee I have ever had and it wasn’t too spicy that I felt like I could only have a few bites at a time. Last week he sent me his new scorpion caramel, and I will tell you that was another home run. We aren’t here to review caramels though. No, today it is all about the toffee.

Your review squad for this sweet and spicy review is Ken Alexander, Heynetboy & Michael Hansen.

About The Madison Chocolatiers West

The Madison Chocolatiers West is owned and operated by Renee Rohrbach and Chef Ricky Sanders.

We want to light up all 5 of your senses, bringing them all together in an explosive moment to remember. Our chocolates go past the traditional concept, so we play a lot in the kitchen, visit spice and tea stores, Asian markets and wherever there may be an unusual ingredient that gets the creative juices flowing. We like different, unique and out of the box. Generally, we like the WOW factor. Being non-traditional chocolatiers, we seek out new and different ways and means to blend ingredients to bring out the utmost flavor profile and awaken the taste buds. We love making chocolates that have many layers of taste and texture with only a few ingredients. We also do not use waxes or preservatives because we believe fresh is best.

The Madison Chocolatier was Renee’s creation. She invested $20.00 of her bill money to buy some chocolate to make Valentine’s presents for her children, family and friends. People were thrilled with her creations, so she continued building her array of chocolates. Being a new single mom and having two children to raise, this was a great way for her to be able to have the time for them and to still make ends meet.

During this time Renee did events, shows and fundraisers, helping others as she helped herself. As others started noticing her chocolates, she started winning awards for her efforts. Including Best Miniature Chocolate at the Art of Chocolate, tasting and competition to benefit the Domestic Abuse and Sexual Assault Center of Warren County, for her Truffle filled Calymirna Fig, along with Most Innovative Use of Chocolate for her Blackberry Heaven Truffle with its phylo pastry cup.

Then at the junction of Dark Chocolate and Bacon Avenue, Renee met up with what would later become her new partner in chocolate crime. Ricky had asked her if she had ever done anything with bacon and pistachios. Not long after, the two joined forces to create The Madison Chocolatiers West.

Chef Ricky, a graduate of the Culinary Arts- Le Cordon Bleu in Portland Oregon, served his internship with Moonstruck Chocolatiers. After that he did some cooking and then went into the bakery field. He worked several years as an Assistant Production Manger, in the wholesale bakery industry. During his time there he also worked in research and development. His products sometimes, went too far out of the box for the owners taste. Chef Ricky now has the perfect partner in creating those wonderful infusions and wild ideas that come up during their searching of stores and hidden places.

Now that East and West have come together. We now have a mission to help others as we grow as a company and teach the great aspects of chocolate and the great things that it brings. Chocolate has so many health benefits, including reducing stress and releasing endorphins that make you feel happy. What better match could one come up with to help others in so many ways?