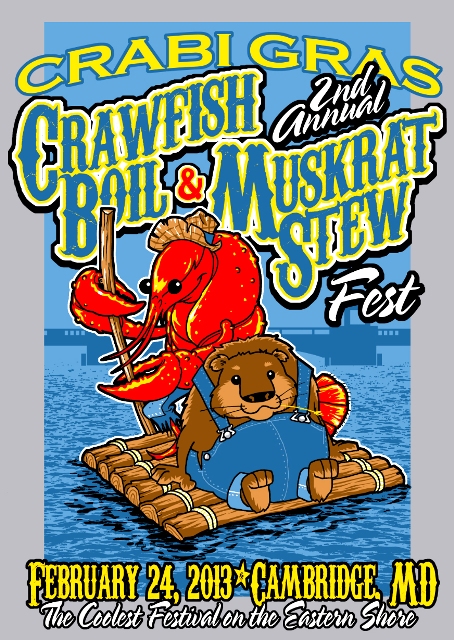 Celebrate the Eastern Shore’s muskrat heritage Sunday, February 24th at the Crawfish Boil & Muskrat Stew Fest in downtown Cambridge “The Coolest Festival on the Eastern Shore”. Set for 12noon-6 pm in the Cannery Way park in the 400 block of Race Street, the event features music, food, libations, and a bottomless supply of the title attractions—Dorchester County Muskrat Stew & Boiled Crawfish flown in live from Louisiana. Hot Dogs, Burgers, Raw Oysters and other foods will also be on the menu.

The downtown business Crabi Gras, 432 Race Street, is organizing the event. Owner Keith Graffius has announced that local favorites Rollin’ & Tumblin’ and D.C. Blues Legend Jimmy Cole and his Band will be the featured musical entertainers for the event.

Based in Washington, D.C., Jimmy Cole is one of the most popular names in national’s capitol’s blues scene, and has been for decades. A fun young band guaranteed to get you dancing, Rollin’ & Tumblin’ thrills its audience with a mix of honky tonk, country, blues and Cajun styles. “We are hyped for this festival!” Said Josh Woodard, guitarist and singer for Rollin’ & Tumblin’. “Crawfish, muskrats and great music! No better excuse for a Winter Festival in my opinion.”

For more information about the 2nd Annual Crawfish Boil & Muskrat Stew Fest on Sunday, February 24 visit www.cambridgemainstreet.com and http://www.facebook.com/crabigras or contact 410-228-0108 or crabigras@gmail.com.