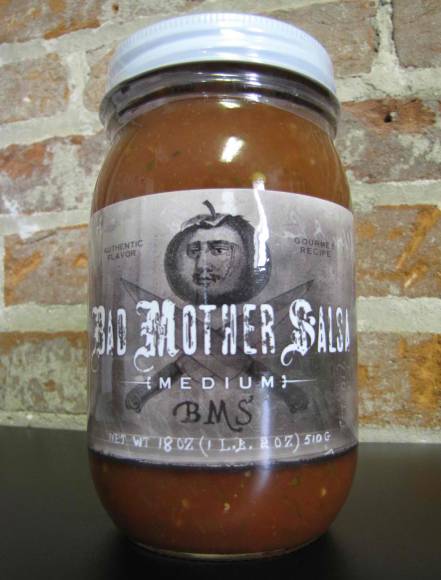 Chief Miguel Quijano once again leads the way for the Fire Dawgs along with Firefighter Andrew Warren and Probationary Officer(Probbie) Quist. This time they are reviewing a salsa from Dayton, Ohio. This is their medium heat style, which happens to be at this moment the only heat level they make. Although they do make a spicy BBQ sauce too. Before we get to the salsa review, let’s here a wee bit about the people behind this tomatoey concoction.

A little about the history of Bad Mother Salsa…

Stropich Specialty Foods, LLC, based in Dayton, Ohio was formed in October 2011 with one objective in mind – To achieve a prodigious feat of creating the absolute best salsa and sauces known to mankind. It isn’t about quantity, but much rather quality. The leading product, Bad Mother Salsa (medium heat) was the pain-staking result of the owner’s (Shawn Stropich) efforts of analyzing many years of chasing the seemingly allusive quest for salsa greatness. The interest began at an early age and peaked while traveling the 50 continental states (less Maine) and throughout Mexico to finally create the answer – Bad Mother Salsa. The design and name came much later, after many years of selling limited quantities right out of the home. Demand was far greater than supply, due mainly to the inability to attain a variety of particular ingredients. The design came to fruition of what many young folks often seem to say nowadays after a sample taste, “Wow, that stuff is bada**” We knew somehow that bad meant good. And so after much contemplation, the only thing we could think of with regards to something being called “bad” that meant “good” was a boxer – a true prizefighter and a real slugger. So, in accordance, the label design of Bad Mother Salsa began. Most folks would never notice, but the face on the label even shows his facial “wounds” of being a real Bad Mother – and so the salsa reigns as champion!