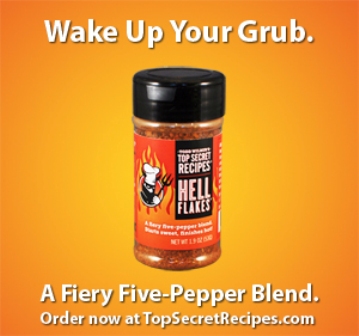 Todd Wilbur calls himself a Food Hacker, which is a professional recipe solver. He takes well known secret recipes and figures them out. He then shares them with his fans on his website via the book or ebook route – www.topsecretrecipes.com He has been doing as he calls them “Original Clone Recipes” since 1987. He came to me a few months ago to setup a review for his original spicy seasoning creation, called Hell Flakes. The review team I assembled for this product is Alabama boy Jacob Robertson, Maryland’s own Steve Chambers, and my Northern Virginia neighbor, the one and only G. They did not do any recipe breakdown to solve the Hell Flakes formula, but they did the feedback required to know if this product is worthy of our spicy community. Before we get to the review, how about a little more about this food hacker, Todd Wilbur. Make sure you also check out the Buy 1 Get 1 Free Father’s Day Sale going on now through June 12th on his website HERE! Buying price is only $6.95 and you get 2 containers now. Not a bad deal. 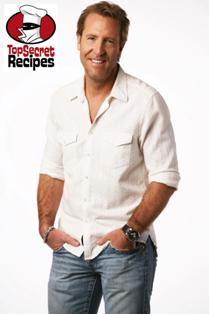 In Orange County, California in the late 80’s Todd received a copy of the notorious Mrs. Fields Cookie Recipe Chain Letter that had been making rounds across the nation. Trying the recipe led to disappointment. This was certainly no “secret formula.” The results tasted nothing like a delicious Mrs. Fields chocolate chip cookie!

“Fake! Phony!” he cried. And then he wondered, “Just who are the goofballs passing this off as an authentic secret formula and how is it that such a bad knockoff recipe becomes so crazy popular?”

Todd had an idea. Since he had way too much free time on his hands, he got to work on a recipe for a cookie that had the flavor, texture and appearance of a real Mrs. Fields cookie. How hard could it be? Batch after batch the clones came closer to the real thing, until one day, it happened. The cookies came out chewy and delicious, with crispy edges and that strong vanilla aroma. Bingo! The first Top Secret Recipe was born.

“So,” Todd thought, “what’s next?” This time he would target a brand-name food even more popular than a Mrs. Fields cookie. An item sold in the billions around the world would do just fine. A trip to McDonald’s for a sack full of Big Macs and the next top secret cloning mission was well under way.

Over the next five years, Todd’s collection of recipes grew. He baked, he cooked, he dissected. He learned the ins and outs of cooking from reading the most famous cookbooks and watching hours and hours of cooking shows on TV. He talked to chefs, and cooks, and waiters, and food manufacturers. When he was at the counter of a fast food restaurant, he craned his neck to watch what was going on behind the scenes. What at one time was just a strange little hobby grown out of curiosity, boredom and perhaps a few too many Foster’s oilcans, had now become a passion.

While creating his first book, Todd had a full-time job to pay the bills. In fact, Todd had several jobs over those years as he slowly built his compilation of clones. He had been working as an advertising copywriter, and as a commodities broker. He was a security guard. He was a commercial real estate salesman, and sold nothing. He landed a job as a TV news reporter and anchor at an NBC-affiliate station in Yuma, Arizona. Then he worked at another station in Allentown, Pennsylvania as a bureau reporter. But all these “careers” were short-lived. Up to this point Todd had never been able to hold onto a job for more than a year. Things were about to change.

By this time Todd’s collection of recipes had grown to more than 40. They included clone recipes for Orange Julius ® , KFC ® Fried Chicken, Reese’s® Peanut Butter Cups, Sara Lee® Cheesecake, Wendy’s® Chili, Hostess® Twinkie®, Snickers® Candy Bar, Taco Bell® Enchirito®, and dozens more famous American favorites. Todd fell back on his earlier training as an artist to create schematic drawings of many of the products that fit perfectly with the book’s top secret theme. Finally, it was complete.

In late 1991, Todd made a dangerous decision. He quit his TV reporting job and spent all his time preparing dozens of manuscripts. He put together about thirty copies of the completed book and blindly sent them off to publishing houses across the country. While he waited for any response to those unsolicited manuscripts, he made ends meet as a part-time videographer, shooting paramedics and fireman at work in Philadelphia for the national reality show “Emergency On-Scene Response”.

Soon, just as the bank account was running dry, the good news came: Five publishers made offers to publish the book. One of them was Plume, an imprint of Penguin, USA, one of the largest publishers in the world. Todd didn’t know much about the publishing business at the time, but figured a publishing house with Stephen King as an author probably knows its stuff. Todd accepted the offer from Plume and the book went into production.

In the summer of 1993, Top Secret Recipes® hit the shelves and soon went onto the bestseller list. This surprising success led to appearances on several popular TV and radio shows. By this time stacks of fan mail were coming in with requests for more recipes to clone! Todd went back to work on his follow-up, More Top Secret Recipes®, which came out a year-and-a-half later, followed by the book that would go on to sell over 1.5 million copies, Top Secret Restaurant Recipes.