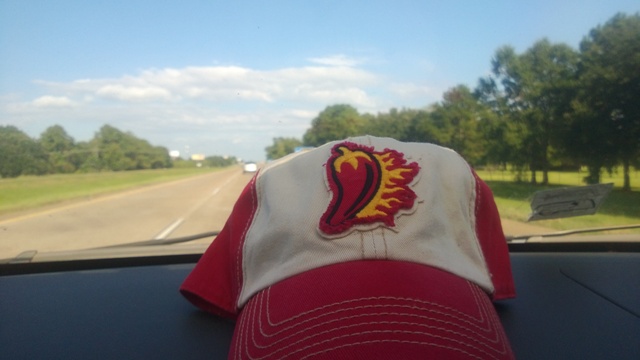 My trip began at my place of work in Reston, VA, continued to Houston, TX and then onward to New Orleans. I got to take part in 2 shows, visited with some chilehead friends along the way in my travels and got to spend some quality time with a lot of great people. I did close to 3,000 miles, and it was a trip I will never forget until the day my brain stops functioning. This trip changed me in a very good way, but it wasn’t without some highs and lows. In the coming days, I will tell you much of what I experienced, the good and the bad. I have a lot of people to thank and praise, so please allow me that license to kiss a little booty from time to time. So let me get going with how it all started…

The plan for me was to travel after I got off of work. Unfortunately, my hours are not conventional, and I start at 4am, and need to awaken by 3am to make it on time. Lucky for me I left work early and hit the road around 9:45am. My goal was to get as close to Nashville, TN as possible because I was to meet Jim O’Brien of Crazy Good Sauces for lunch the next day in Memphis, which is around 3 hours drive from Nashville. While it was a long drive I listened to the radio and time flew by faster than I expected it to. Next thing I knew it was around 8pm when I hit Nashville and the first traffic of my trip hit, but it wasn’t the NYC or Washington, DC traffic that I am used to. The traffic lasted close to 20 minutes still moving around 30-45 mph, and it was over once I was past the city limits. Once I realized how awake I was I decided to travel closer to Memphis to see how far I would get.

Just when I had felt the tiredness hit me I received a picture text message from CaJohn. It was a burger and fries. Knowing he was on the road too, I had to ask where that was. He tells me Memphis. I tell him I am not far off, and he decides to wait for me and meets me at the Rum Boogie Cafe along with his son Nate aka Nate Dawg. The Rum Boogie Cafe was the place I had the best rack of ribs of my life. I was there close to 15 years ago with my buddy Steve, and it was so good we went back the next day to eat there again. Well, I am on the Spicy Diet Low-Carb dealio, so I do not want a big platter of food, but the only way to get any ribs was to order the dinner plate which comes with baked beans, fries and cole slaw. Nothing I wanted, and I could not substitute out. So I was hoping that Nate and CaJohn would eat with me, but they were still full from their meal. Food was wasted. So here comes this big ass plate of food. I failed many pics of food on this trip, and this was one of them. I eat 2 small ribs at the end of the rack and I feel the meat is too chewy and the sauce is nothing more than hyped-up ketchup BBQ sauce. Nothing in anyway like what I had before. It is okay, but nothing worth spending the amount I was too spend on it. Since I have lap-band surgery I have to really chew my food or it will get stuck trying to get passed the small opening of my stomach. If it gets stuck, a good probability is I will suffer for a bit, not be able to eat for a while and it will eventually pass. Another smaller probability is that it won’t dislodge and it comes out in a nasty way vomit-style, but mostly semi-clear stomach fluid. Either way, it is not pretty. Well, I call for a doggie bag, I can’t eat no more and we leave after just 2 ribs. We had a $3 cover at the door too that CaJohn graciously paid for. Music that pretty much seized once we sat down. Anyway, we part ways and as I am walking back to my car I feel the rib meat wanting to suddenly make a curtain call. I shuffle off to the parking garage hoping to see a garbage can to lean on just in case I do unleash. A man in a wheelchair catches my eye and asks if he could have my doggie bag. I am okay with it since I really did not like it anyway, and who am I to refuse to help a hungry handicapped man. So I pass it along, he thanks me, and I walk into the parking garage. As soon as I see the opening of the garbage receptacle the torrent of rib juice comes forth like an image from the Stand By Me movie during the blueberry pie eating contest. For those that remember that scene can get a sense of my spray. I think the diet Gods were angry with my first choice of late night dinner.

First day is over around 1:30am with 14 hours of travel out of the way. I had a free Holiday Inn room from all the points I had received over the years at attending shows, and was very happy with the accommodations which wasn’t far off from where I would meet Jim O’Brien for lunch. It was a long day.

I was forewarned that Memphis was central standard time and that I had lost an hour of clock time. All good with me, but I forgot to change the clock in the car and my Sirius Radio Clock never changed either. When Jim told me to meet him at 11am, I was waiting at our destination at 10am instead. Luckily Jim called me after 15 minutes waiting to let me know we would be meeting at another location, and it was his laughter at my stupid time management that put a smile on both of our faces. Before this trip I was feeling pretty low emotionally and I needed all the laughter I could get, and being around friends is the best kind of medicine. Starting with CaJohn and Nate was the perfect beginning for me. Jim made me forget everything as we bonded over some great BBQ at Central BBQ. Jim’s buddy is co-owner Craig Blondis and after he gave me a swell introduction he told us the food was on the house and order anything we wanted. He then came over and sat with us.

I was still trying to be good so my order was 3 ribs with sauce on side, cole slaw and a side order of pork rinds. Pork Rinds is a low-carb dieter’s best friend, and these were awesomely seasoned and huge. I suggested putting a dip or two on the menu for these bad boys and Craig liked the idea. Next time I come through I will be looking for said dip. Craig was an amazing host and gave me a bunch of his different rubs and some BBQ sauce to take back and share with others the next time I slow cook some pork. The food was great, and the little taste of the hot BBQ sauce left me wanting more. It was the kind of BBQ Sauce I could dine on for the rest of my life. Unfortunately, not good for my diet. This is want I remember enjoying at the Rum Boogie Cafe many moons ago. Luckily I got that out of my system the night before. Pun intended.

Jim and I parted ways after a lengthy chat about his growing company’s success. It was a very enjoyable lunch with great company. Thank you Jim and Craig for enlightening my taste buds to what real competition Que is like. Want to know a little about this place, check out their website and watch the video and see why people love it so much.

I got back on the road at 1pm CST and my goal was to get as close to Houston as I could. I had 10 hours of travel in front of me. Outside of gas, I did not make any food stops. I had packed low-carb for this part of my trip and wanted to put the metal to the pedal. I had the Broncos and Eagles NFL game to get me through the harder miles at night and I was doing great until the game was over and the rainfall came down violently. The highway through TX was 75 MPH, but the best I could do was 55 MPH. I lost a lot of time because of really bad visibility and I was growing increasingly tired every waking minute. I had to slap myself silly to stay away for the final 20 miles. I was quite relieved to have made it without falling asleep. It was a little after midnight, 11 more hours of travel behind me. The first part of my journey was over and now it was time to hang with some friends in Houston. We had the Amy & James Beck/Wreck post-wedding party to attend, then the Houston Hot Sauce Festival, the day after that. I was sharing accommodations with the Sauce Goddess, Jennifer Reynolds, and was able to quietly sneak into the room without her waking up and crawl into bed and pass out pretty fast.

How Deep is Your Chile Pepper Love?

The Church of the Chile Pepper with Pastor Sam Peters