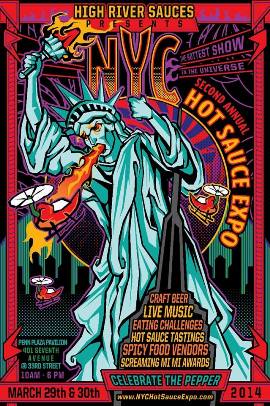 What is on tap for the Expo?

For tickets and information, visit http://www.nychotsauceexpo.com/vendors.php

There are plenty of vendors to sample spicy products, and there is a nice schedule of entertainment too.  ILoveItSpicy has once again teamed up with Tim Bader of Volcanic Peppers and Grimaldi’s Pizzeria to reintroduce the masses to our Fiery Pizza Eating Challenge.  We are bringing back another amazing trophy that rivals any eating contest you have ever witnessed.  Defending Champion John Krasnow will be back to keep his title and to get another trophy for his mantlepiece.    We look forward to entertain the crowd as each competitor attempts to finish their own deliciously spicy pie before anyone else can.  A race against the clock and a fight against unbelievably fiery heat from Volcanic Peppers’ blend of super hot chiles and Italian Seasonings. 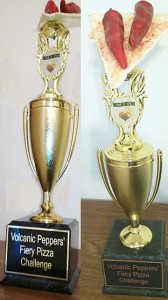 There a slew of other contests including the ever-popular Defcon Sauces’ Deathmatch, which kicks of first at 1pm.  John Dilley is proclaiming this to be the new home of the Championship Deathmatch, so I am fearful for those that dare to take this one on.  If you have never seen one, you better check this one out.  Always entertaining.  Then we have Intensity Academy’s Lollipop Lick-A-Thon, also sponsored by iBurn.com.  Being a 1 time winner and multiple loser anytime I have faced Vic Clinco, I can tell you that while these pops are delicious, the after effects will be a constant reminder that you were in a battle.  The pain is soo good!

Ending the Saturday’s show is the Screaming Mi Mi Awards which are judged by foodies and other industry professionals.  At 4pm the winners will be announced.

Something new to the eating competition world are what we have to look forward to on Sunday.  For starters we have the Heartbreaking Dawns’ Spicy Knish Eating Contest.  If you have never eaten a potato knish in NY, then you are missing out.  These delicious creations are the simplest forms of potato Nirvana, especially accompanied by a good spicy deli mustard.  So what will Johnny McLaughlin of Heartbreaking Dawns unless with his spicy knishes?  I am anxious to see.  If I could be in any eating contest I think this would be my choice.  There is also a Bloody Mary mix Down Championship that has been ongoing for a couple of months at some of NY’s hottest bars.  Pitting some great bartenders to serve up some amazing Bloody Mary’s.  Sponsoring this event is our buddy Stephen “The Murph” Murphy of The Murph’s Famous Bloody Mary Mix and they also have the great Stoli Vodka to be add their fine spirits to the challenge.

Then last, but certainly not least, Puckerbutt Pepper Company presents Smoking Ed’s Carolina Reaper Pepper Guinness Book of Records Eating Challenge.  Steve Seabury has arranged for Guinness to be on tap for this World Record, and I am not talking about the beer.  A previous attempt to video Steve “The Machine” Smallwood’s record breaking ghost pepper attempt was not accepted by Guinness even though there were plenty of video evidence and witnesses to the amazing feat.  This time, we will have a new pepper eating record, because this is the 1st time anyone has ever attempted to take on the new record holding hottest chile pepper in the world – the Smoking Ed’s Carolina Reaper – in this fashion.  Thanks to the good people of Peppers, specifically Chip Hearn, The Machine is being flown in to take on all challenges.  I do believe a plane ticket has also been purchased to bring in Ted “the Fire-Breathing Idiot” Barrus from across country to take on the Machine in a battle for the ages.  Who else will be on hand?  I can not wait to see what happens.  We at ILoveItSpicy at a bit prejudiced to the fact that the Machine is one of own reviewers here, and we take great pride in being a part of his circle of friends.  Knock ’em dead Machine!

The New York City Hot Sauce Expo would like to welcome this year’s group of vendors. These are some of the best artisan hot sauce makers in the world. Make sure you stop by each booth and say hello.