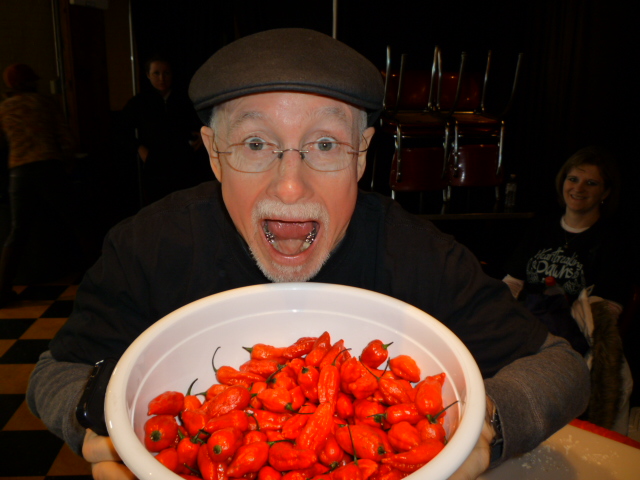 When Buddah asked me to be a contributing columnist for his new vision, “Chilehead Monthly”, I almost said no since I already struggle to make time to write for my own blog. But Buddah gave me my start in the community, and has become a close, honored friend, so how could I say no? So, in true Buddah whip cracking fashion, I got my first copy deadline (tonight! LOL) and he asked me what my theme would be each month. “Theme? I need a theme?” I asked. So I told him that my theme would be original, op ed type random musings from my Chilehead brain. And he was good with that (thanks, Buddah), but he told me that I should include an intro of sorts, so this month will be just that….my intro. The “About” section on my blog, It’s a Fiery World (www.fieryworld.com) does a good job of providing a brief bio, so I’ll give that to Buddah to use as he sees fit. But the real intro is my reflection on what makes a true Chilehead.
Of course, to the casual observer, the obvious answer is plain as day. A Chilehead is someone who loves hot and spicy cuisine, hot sauce, hot peppers, and fiery flavors of all kinds. But that’s just the surface. I’ve discovered that a Chilehead is much, much more. Not only are they someone with a strong tolerance for pain and an asbestos stomach. And they are not just a thrill seeker who wants the endorphin rush that follows the spicy flame that makes their nostrils flare, their blood pressure rise, and their pores open into rivers of delightful sweat. Don’t misunderstand…they are indeed all those things, but that’s still not what defines them as a true Chilehead.
Chileheads are like a good sauce! Adventurous, eclectic, dynamic, simple yet complex, flavorful, mellow, not so mellow, and often full of surprise. Diverse, defined but not bound by stereotype or tradition, providing colorful contrast to a bland situation, and celebrating and complementing each other individually or in a group. Some are sauce makers, some are pepper growers, some are writers, some are entertainers, some are enthusiasts, some are fans, and some are all of the above.
So to translate, here’s what I’ve found and come to love: True Chileheads come from all over and all walks of life…they are rich and poor, young and old, gay and straight, male and female; conservative and liberal. True Chileheads are colorblind. They come in all colors – black, white, red, brown, yellow or in any combination. They are fun-loving, loyal and respectful of each other. Even in a competitive environment, they encourage and help each other, sharing their passion and expertise, and focus on their common passion and bond…and each other. That’s the true appeal for me. I’m part of a crazy family who fights, laughs, and loves but is always there for each other at the end of the day. And I’ve grown to love our Chilehead family….our collective Fiery World!
I’m looking forward to contributing to Chilehead Monthly and hopefully adding a little value in exchange for your time and attention. Thanks for including me in what I hope becomes an anchor in the sea of fiery goodness…..because, Ladies and Gentlemen, It is a Fiery World!!!

Who is Ken Alexander and what does my fiery world include? Well, I am a self-professed Chilehead, or lover of hot and spicy food. Being raised with a “foodie” mother who loved to cook and loved spice and flavor, I was destined to celebrate the food I ate, but it wasn’t until the mid 1990’s that hot and spicy started to take center stage. Living in New Iberia, La, the epicenter of Tabasco, Louisiana Hot Sauce, and Cajun cuisine, my taste buds started up the ladder of heat, rung by spicy rung. I bought Jennifer Trainer Thompson’s first edition hot sauce poster as a conversation piece for my office, and started a mission of sampling sauces from that poster.

A few years later, we were living in Tennessee, and BBQ was king! Thank you! Thank you very much! I was given the opportunity to be trained as a Memphis in May BBQ judge, and judged the Tennessee state BBQ championship. Shortly thereafter, I was introduced to Dave’s Insanity Sauce, my wife bought me a bottle of Scorned Woman, and the rest, as they say, is history!  The passion was born!

I have a knack for discerning flavor, and  I like to write, and I’m a ham and like the camera! It’s a natural fit.  I hope you enjoy my column as well as my blog www.Fiery World.com, and celebrate with me that, yes Virginia, It’s a Fiery World!