Sorry it took so long, but I am still learning how to edit video, and I am doing a lousy job so far. It is plenty choppy because of my camera skillz.   The jalapeno and wing eating videos will be coming up next.

The show was a lot of fun, but it is always a good time when surround by such a great group of people. Before the show, we had a gathering at CaJohn’s Open House. There was some very delicious food, highlighted by an Orzo Shrimp Etoufee and some scrumptious chicken wings. One of the new vendors that came in from Upstate New York, Johnny and Nicole of Heartbreaking Dawns came bearing brownies. Long after they had left, those brownies became the signature dish of the evening. Using some of CaJohn’s peanut butter on top of the brownie, mere words could not convey the pure heaven that erupted in our mouths. Once the word got around by yours truly, the brownies were devoured in mere moments.

Beyond the food, CaJohn’s factory was still in the works and was not completed yet. So another Open House will have to take place as always the Monday following Weekend of Fire, first Monday in August. We got to sign our names on a wall in the main part of the warehouse. I got an additional honor by CaJohn and got to sign in front of a doorway, that John entitled the “Buddah Room”. No, it wasn’t to be a future bathroom. I was truly honored, but I am afraid the honor was bestowed via beer goggles. Nevertheless, Sue aka Wicked Wanza, aka John’s better half, informed me that paint would take care of my autograph all in due time.

It was fun hanging and chatting it up with some of my Chilehead friends, but the event the next day was what we all came for. My video only offers a small look at some of the people behind the scenes. There were 3 amateur contests- salsa, hot sauce(I was a judge in this one) and chili. The chili also had a professional level as well. There were 2 eating contests- a jalapeno eating contest which I will show a video of soon after this video, and likewise for the spicy wing eating contest soon after the jalapeno one is up.

You will notice in the video that I said I was not going to enter my hotel made salsa, but I decided to anyway. I figure if I was going to spend the time and money trying to make it, then why not at least get some feedback. I had a lot of issues with making it. I forgot to bring the jalapeno hot sauce I usually use, although I did have a worthy substitute from CaJohn’s Fiery Foods. I also bought a garlic press, and forgot to buy the garlic. I did get some minced garlic at another store later on. The worst part was the cilantro I thought I bought ended up being parsley. At the North Market green grocer, they put both leafy herbs together, and they look very much alike. I smelled the one I chose and it smelled like cilantro. I guess if you place it next to cilantro that might happen. When I opened the bag at the hotel, it only slightly smelled like cilantro. With midnight closing in, I had no choice but to use all the basil that I was using instead. It went from Mexican style to a weak Italian. The score I got was a lot more than I expected. In fact, one of the judges gave me a perfect 20 score. I don’t think whomever that was knows salsa, but who am I to argue? Maybe next year I will be better prepared.

The hot sauce judging was fun. By the time I had the last hot sauce, offered by the Chilehead legend, Jon Passow, I had a nice endorphin rush going on. Yet, with Jon’s sauce, it was quite over the top heatwise and I heard cursing amongst the judges. I honestly thought it was the worst tasting of all the sauces, mainly due to the unripe peppers he used, but I did love the heat. It was too thick for me and way too bitter.

There was some very tasty sauces, but I think most of the top ones still needed some minor tinkering with the recipes. The same could be said with the salsa competition. Our friend, Sandi Kraft took home the grand prize in that one. A mango cilantro entry was quite a fresh experience, even with the black-eyed peas that didn’t seem to fit texture-wise. I was too busy battling Passow’s burn to get any names of the winners from the hot sauce contest. I am sorry for not listing those. Hopefully someone that remembers will stop by with the info.

I will have more wrap-up with the jalapeno and wing eating contests videos. So look for those in the upcoming days. 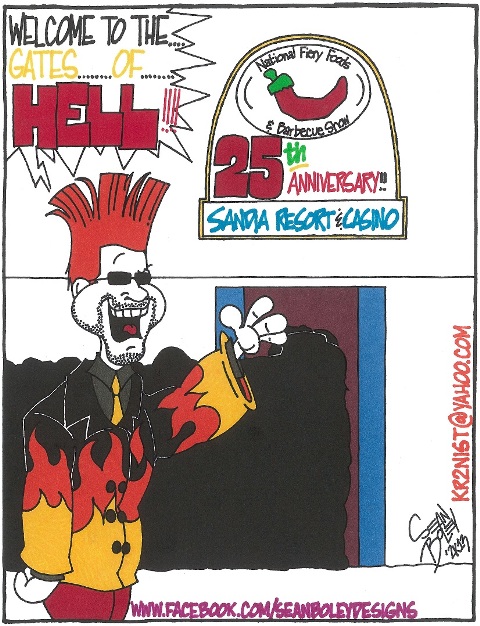