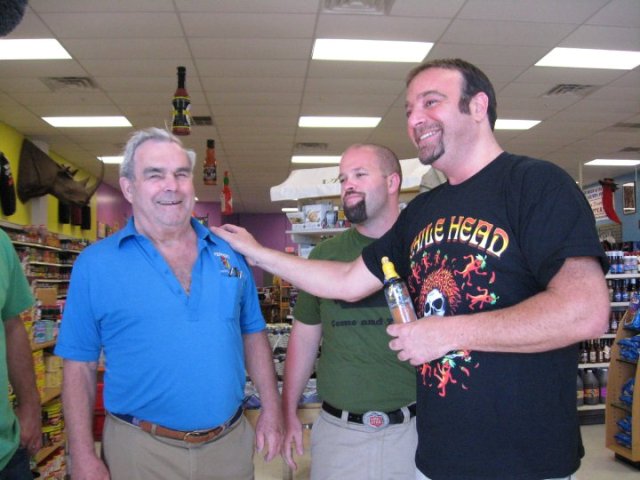 One year ago, John Dilley of Defcon Sauces and Chip Hearn of Peppers of Rehoboth Beach, DE, had the idea to organize a friendly little chilehead gathering. Chip and his Dad Luther opened up their parking lot to any company that wanted to come setup a tent/table and sell their fiery wears. Small scale, with very little advertising to launch this event. Despite this, several companies and chileheads came, plus several blogs were represented. While it wasn’t a huge event, it was free and Peppers opened up their arms to embrace all those that came. Plus, a very special surprise visit by Blair Lazar was made as pictured above, and he came bearing gifts to some very lucky chileheads.

Fast forward one year, and we have a bigger event. 3 days instead of 2, Friday-Sunday, March 20 -22. The show is now being pushed and advertised more thoroughly than it was a year ago. A local TV Station will be filming the show on Saturday. There will be a Defcon Deathmatch at Noon on Saturday. Peppers also announced this recently:

To all my vendors out there that will be attending Peppers At The Beach. Will will be holding 3 wing contests on Saturday May 21st. We will have local media here filming these events. The 3 wing contests are Most Unusual Chicken (NO RULES), Best Restaurant Chicken Wings(IF YOU DON’T HAVE ONE MAKE ONE UP FOR THE DAY), & Best Buffalo Chicken Wings (IF IT LOOKS LIKE BUFFALO WE’LL ACCEPT IT). If there are any other questions about this contest please let me know.

Uncooked chicken wings will be provided for those interested in participating in any of the chicken wing challenges. You just have to cook and prepare them yourselves. You will see by the list of vendors below, there are quite a lot of Wing Sauce guys attending this event.

Several blogs will once again be represented. James Beck from Houston, TX of EatMoreHeat.com will be once again doing a live webcast as they did at the Fiery Food Show in New Mexico back in March. Brian and Marilyn Meagher of HotSauceDaily/Weekly.com will be organizing another Blogger’s Round Table for their podcast. I hope to be able to film this event as well as I did at the Weekend of Fire Show. Scott Roberts from ScottRobertsweb.com will be flying into my area from St. Louis to drive with me. Doug Spiros from PeppersandMore.com will be attending again, but this time not just as a blogger, but also as a vendor, representing his Jersey Boyz Jerky company. Last year, some of the bloggers from TheHotPepper.com forum stopped by too. Jay Tippett will be representing them this year.

The ever-growing list of vendors has been updated several times. The current list as of this past Saturday is as such:

If you are within the area and would like to attend as a vendor, please contact Luther Hearn at 302-645-0812. If you are a chilehead on the east coast and want to come by one of the days, please help the vendors out and make it worth their time and expenses. If you wish to stay over as some of us will be doing, here are a list of hotels:

Look for Scott and I to roll in Friday night at the Econolodge. Hopefully still earlier enough to catch some people for a nitecap. See ya there!

What Is I Love It Spicy?

8 thoughts on “SNEAK PREVIEW: Peppers at the Beach”