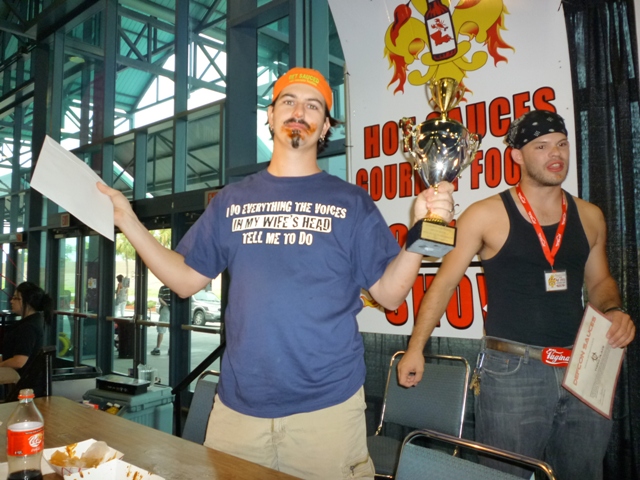 I love New Orleans. It is one of my favorite cities to go to. To bring a hot sauce show to this place is like giving me a birthday present. I want nothing more than this show to succeed, so I can come back here for the rest of my life, year in and year out to enjoy everything this past weekend had to offer. Well, as long as I can afford to do it at any rate, I will be here no questions asked. With that said, I am a bit worried after attending the event this weekend about whether it can make it back. Yet, I am also privy to some information that may make it one of the biggest chile shows on the planet next year. If all goes as I expect it to be, then it will be a show that vendors will be adding to their must do roster.

I am teetering with the good and the bad of the show. The good was the general fun, and there is a lot of it. Starting and ending with friends of the chile community. Whether it be strolling through the show, over dinner or lounging around the hotel pool area, the highlight for me is just talking to so many great people. Even meeting new companies like Reva Foods, Cuddin’ Eddie, Sicily’s Finest Gourmet Foods and first timers Chris and Mike of Wicked Cactus Sauces. Plus, future ILIS reviewers Ken Alexander and Frog Leg Deathmatch Champ, Zzombie and his family whom I became friends with instantly because of their passion to be a part of it all. There is no end for me in this community as it grows every show I attend. We can talk to the wee hours of the night about a broad range of topics, but most of the time we discuss the ups and downs of the chile world experience.

Then there was the time spent in the French Quarter after the Saturday’s event. My bud Eric and I joined Heartbreaking Dawns’ Nicole and Johnny for dinner at a quaint German bistro. Then we scurried over to Bourbon Street and the on going party above the street at a private balcony with open bar. All thanks to the show’s sponsor, Brian and Chris of Louisiana Pepper Exchange. Two years in a row, providing the entertainment for those that can remember the fun the next day. A HUGE thanks goes out to them for being a major supporter of the show.

We had the award ceremony there with an open bar for chileheads. Which is probably bad enough, but then you throw in all those bead necklaces to entice the crowd below. Hey, even I can’t turn that down. I was a little, tiny bit tipsy from a few of those weak hurricane drinks they were serving. As a result, I provided the ugly as I licked wet beads taken from a puddle in the street and placed around my neck by someone I do not know. Not just once, but 4 times. As a germophobe, I can tell you that I regret doing it. Who knows what I inherited by doing that? Eeeeesh! I remember someone taking pics of that, so I am sure I will eventually be Facebooked(is that a word yet?) with them, if I haven’t been all ready.

As for the award ceremony, hands got sore as we clapped and cheered for everyone that got an award. It was a celebration for each other that I truly am thankful that I witnessed. I did film the action too. It might appear to be boring to some, I will admit that. Yet, after receiving a few Fleur de lis awards the often quiet Captain Thom exposes his chest and tummy several times, enticing the room with his colorful pasties. It is not to be missed. Look for that in the coming days. The good Captain also received the Show Honors for Best of Show for his Thai Monkey hot sauce. Congrats Capt and thanks for the show! Also a big tip of the hat to all the winners, some first timers! If I get a list I will add it.

Some more good things about the show were the events that took place. Starting with the spectacle that was the Defcon Frog Leg Eating Contest that I helped arrange. Despite some bad setup that caused the contest to be delayed for almost 45 minutes, it was truly fun to watch. I have some editing to get done before the video gets posted as I just returned this evening. In the meantime, you can watch the EatMoreHeat version with commentary HERE. I can’t seem to get their Stickam video to show up on our website, so this is the best I can do.

There was also the much anticipated Intensity Academy Lick-A-Thon. I think anyone who watched that had some serious laughs as we put on a show that went way past just tongue pain. We had some phone calls and an arm wrestling match between EatMoreHeat’s John Scrovak and yours truly. He never had a shot. I broke out the video cam midway through and focused it on the soon to be 3rd time champion, Vic Clinco, then I decided to check my email messages as I was slurping away on the spicy lolly. Scrovak also did some pushups to keep the follies rolling along. The contest was too long because of the size of the new skull shaped lolly, but we did everything we could to keep the interest of the crowd. Congrats to Vic on his well earned lick trophy. You truly suck more than me.

How about the cooking? We had a rematch of our Feast Your Eyes on This Spicy Cooking Challenge between winner Clement Bourg of Cajun Heat and runner-up Johnny of Heartbreaking Dawns. They of course pulled the wool over our eyes as they turned the Shrimp on Grits Throwdown to a collaborated effort of their cooking styles. They did fool us, but if you tried their Cajunbreaking Dawns bacon-wrapped Shrimp on Grits, you wouldn’t have cared. It was quite the tasty morsel.

We did have a throwdown though, a chili throwdown. On Sunday, the crowd decided the meaty fate of Cousin Boudreaux and JACS Tailgaters, the two friends and now competitors. Samples were handed out from their bubbly cauldrons, and the crowd cast their vote as soon as their taste buds allowed them too. JACS took it running away with the votes as the crowd was swayed by his tomato cumin style chili. Cousin Boudreaux was quite gallant in defeat though. A tip of the hat for both of them.

Tracy Carter of JACS Tailgaters had a dream to bring a hot sauce show to New Orleans. The dream is a reality, but he will tell you there were a lot of pot holes in the road to getting this show here to this point. Any new show is going to have growing pains, and this show is not short of them. This brings me to the bad end of things. Like I said earlier, I want to see this show succeed and grow and be here forever, but I got to be truthful here. The promoter’s decision to combine the Christmas in July Show and this Hot Sauce Show was a huge mistake. Sure there were crowds and bigger numbers than last year, but it was the wrong crowd. People buying what the X-Mas Show was selling wanted little of what the NOLA Hot Sauce & Gourmet Show had to offer. If they had teamed up with a tattoo & piercing Show, then we might see a shared interest. A love of pain. Not some ornament or quilt designs.

The vendors suffered from a lack of attention with most people sampling only or avoiding booth after spicy booth altogether. One vendor told me, that they nearly cried when they counted their money they had made. It is sad, and I so feel for those companies that trekked the distance to invest with the growth of a show. Most were in shock by what had transpired, never thinking it could be so bad. Not all did bad, but the majority didn’t come close to breaking even. These young companies can’t afford to lose when they are looking to survive in this tough marketplace.

There was also no schedule of events anywhere, which Tracy says he blames himself for not arranging prior to the event. No one knew, except word of mouth that there was a frog leg Deathmatch or Lick-A-Thon nor any cooking event. There was no microphone like last year to announce anything to the crowd. EatMoreHeat was using a megaphone, and it ended being a huge tool for all the special on stage activities.

As a result of having no schedule, times were changed and a lot was thrown in disarray as a result. The biggest gaff was the frog legs cooking on a grill because the event center would not allow us to fry them in their kitchen. The grill was a bad idea and at the last minute they had to use a small household fryer to cook the legs. There was also a miscount on the exact number of frog legs we had which we were told were 300, but we barely had enough for 8 people. The event as I said was delayed for 45 minutes. There was also some issues with the Shrimp on Grits event as suddenly I found myself in the cleanup krewe. I needed to know my level of involvement was more than I had thought it was. I will take most of the blame because the cooking contest was my idea, but I didn’t know where the kitchen was and any of the cooking or serving ware, and neither did Johnny and Clement. Then they changed the time of the cook-off without telling me.

I wish we had a sit down beforehand to discuss everything, but arriving so late Friday, there just was no time to do that. Tracy had to set up his own booth, but was trying to get everything and everyone else situated first. It was more than he bargained for. The event needs a non-participant to run the show. Tracy did his job, and he got the show here, now we need someone to take the torch from him and run it the rest of the way. I know how many people love Tracy. He has a heart bigger than Louisiana, and everything he does is to make those around him at this show happy. It is unfortunate he feels the pain of his contemporaries, and you can read it all over his face. He carries the weight of everyone’s success on his shoulders, and it is too much for any man. He tries so hard, but he can’t control everything, and it eats him up inside.

I drew a rather bleak picture of the show, but there is a beacon here, and that beacon can not only save the show, but bring it to the level of the other big events by next year. There is hope, and I feel it in my bones, that we are looking at a big change that will rock the chile community. Once word gets out, people will be booking their booth by the end of the year. Mark my words, the Big Easy better watch out next year because we are going to bring down the house. Who Dat?

Enjoy the pictures and look out for some video footage of the event in the upcoming days. If you have anything to add, such as pics, please send them to me and I will add it to those above. Thanks.