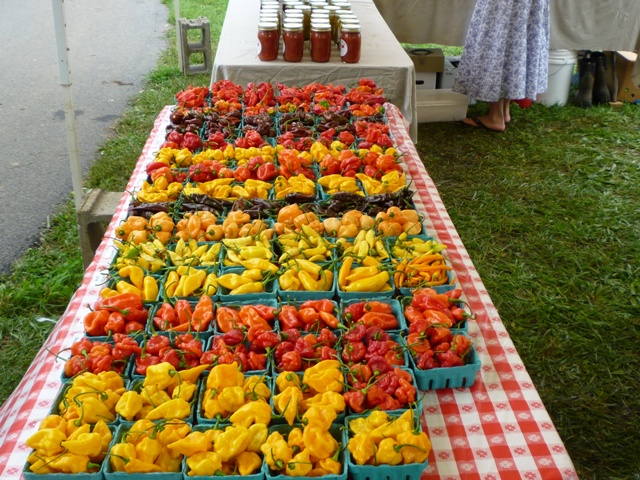 Since I am not a vendor I can not speak firsthand on the success of the event for those that participated at the Bowers 16th Annual Chile Festival. What I can do is relate second via the video some of their thoughts after Day 1 this past Friday. I went around to a few random vendors and got some feedback. I also filmed a few random things at the event so you can get an idea of what was happening.

I did not film my Trinidad Scorpion pepper pickin’ this year. I met Nicole from Heartbreaking Dawns at the fields and she had made her presence known as the plants were picked clean on one side. I did get 2 lbs worth, mostly unripen ones to share at either Weekend of Fire or Open Fields if I can make them last that long. Especially now that Open Fields is 2 weekends further away than last year. I did not refrigerate them last time so I hope that works to preserve them. At any rate, Nicole made several more trips over the 2 days to further dent the Mennonites pepper crops.

The Mennonites make some nice baked treats at the barn, so for those of you into some spicy snacks you might want to check them out. Their .50¢ spicy chocolate and peanut butter Rice krispy treats were really good and a nice heat level that wouldn’t really hurt most people. I also got their spicy strawberry bars which was like a fruity, soft granola snack that I had never had before. It was not as spicy as the Krispy treat, but it was quite good. Their $1 whoopie pies were not spicy but good too. They had pies for $4.25 and bread loaves for under $2. They were also serving spicy ice cream, spicy cheese and cooked goods as well. They had jarred pickles, ketchup, hot sauces, relishes, and other various jar and bottled selections. You can see some of the various hottest chiles in the world laid out to buy or tomatoes, and a load of gourds and pumpkins to bring back for Halloween. I think the trip to the barn was worth it.

At the show, if you weren’t tasting hot sauce you could be entertained by the folk music presented at the main stage. It is also where they had the amateur salsa contest and jalapeno eating contest. I was proud of my 4th place finish this year with my watermelon salsa called April Fools Day Salsa. I called it that because I didn’t tell the judges that it had watermelon in it and no tomato. No one knew until I told them afterwards. They still liked it and 2 of the judges voted my salsa the best of the contest which I of course was quite elated about. I didn’t know anyone else that entered, but they did say they had someone who won 3 out of the last 4 years. Congrats to them. Time to start selling it so we all can try it!

Did I mention the bad weather? Well despite all the forecasts predicting gloom and doom, the sun brightened most of both days. The only time it rained was when we were sleeping. Some clouds crept in early, but the sunshine would not be denied. I was so happy for not only myself because I came with no umbrella or parka, but for all the vendors I told to come to this event. There was flooding in other parts of the state and surrounding states from the torrential downpours we had previous days right before the show. The creek was streaming higher than usual right at the border of the festival. There was some overflow by the old parking area, but they opened up another lot for others to go to.

The people came too. Friday and Saturday they came, sampled and bought. People seemed to feel at home with the hot stuff. I was surprised with the number of ladies taking on the hottest of condiments. They made me proud to be an American. This Bowers, Pennsylvania is the heartland of American Chileheads. A lot of shows become nothing more than sampling feasts for those that pay admission fees. This show asks for a $2 donation, and by golly they do not mind paying and spending for what they like. The event is much like any Farmer’s Market where people don’t leave their house to just browse, they come with wallets open and willing to buy.

I was so happy for my chile brethren who came and made out well beyond their expectations. I hope most of them did well. Hopefully we can get some feedback from some of our friends on their individual success.
Torchbearer Sauces’ Vid Lynch told me that every year for the past 5 years since joining this show he has seen increased sales. Whether it be by returning fans of their products or increased attendance, the Bowers show has been a success for them. I imagine that the longer anyone does a show, the more likely it will be to see the money acquisition rise. You still have to have products worthy of purchase, and they continue to be innovative as some of their new garlic sauces show in their versatility.

Speaking of products, in 1 year Dragonfire Hot Sauce has taken his original hot sauce in varying degrees of heat and added a very impressive line of delicious originals. The new Fra-Diavolo sauce, teriyaki dipping sauce with the light balsamic vinegarette flavor, pineapple habanero hot sauce, and their newest upcoming blueberry 7-pot hot sauce all really show that Rick Villafrede is here to make a statement. Beyond the small stature of his company, he still played host for this event by organizing a dinner Saturday night a few miles away in Allentown at the Copperhead Grille. Fun and delicious cuisine was had by all. Thanks Rick for going above and beyond the extra mile to put this gathering together. Just so you know I am not kissing his ass, I really mean what I say about his sauce line. While I do not like his original extra hot Naga Revenge because the pepper flavor is too much for me, his mild Original hot sauce won my praise last year and is one of my favorites of 2010.

Another couple of products that got my notice was Jeff’s Chile Spot and their new ghost pepper peach mango jam. I really liked it and did not find it too hot to keep eating. It is so fresh and I can’t wait to add it too some warm corn bread. Then there is CaJohn’s new Trinidad Scorpion line. I stayed clear of the puree because I had a dose of it at the Fiery Food Show, and it was enough for me to not to take another trip down memory lane. The new BBQ and Salsa though I did take a hit of. In about 10 minutes of burn, I was left with a nice endorphin high. The flavor of the scorpion comes right through and settles in nicely with the other flavors before the pain hits.

There is a lot of companies that I had the pleasure to sample sauces from. Newbies Steve Seabury of High River Sauces and Jeremy and Kat Walsh of Bigfat’s Hot Sauce were welcome additions to the community with some fine flavors in their products. Steve’s newest creation Tears of the Sun had a sweet tropical flavor with some habanero goodness. While Bigfat’s garlic ginger(308) and jerk style (408) were my favorites in his sauce line.

While I am not mentioning the other fine companies and take everyone’s picture, take note that there are a lot of good companies that attended the show that I just failed to take note of until now. Bonfatto’s Wing Sauce & Marinade, Kirby’s Pretzels, Twisted Twin Salsa, Captain Thom, Miller’s Mustard, Heartbreaking Dawns, Crazy Steve’s Pickles & Salsa, and it was great to see and buy from Lars of Csigi Gourmet again. It has been a long while since I had a bottle in my fridge of Salubrious Savina. Probably 3 years. 3 long years. Check him out if you never had his sauce line.

To wrap it up, I have some pics and a video to get an idea of what you missed. Enjoy.

2011 Peppers at the Beach Blogger’s Round Table