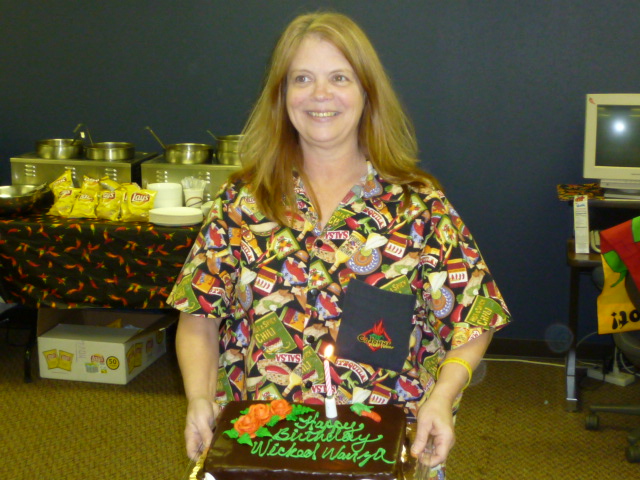 Ryan and I got up and running early to head up to Columbus for CaJohn’s Open House. Listening to the Yeti GPS voice I missed our exit leaving the Cincy area which delayed us about 15 or so minutes. It grunts in anger when you screw up, and I did not notice it because we were in deep conversation. Lesson learned, and I hit up Squirrely the squirrel to get us there from that point on. Hey little things please me, what can I say?

By the time we got to CaJohn’s Fiery Food Warehouse we had a full room full of chileheads. We grabbed some eats and got to chatting. Before I left I bought a birthday cake for Sue Hard aka Wicked Wanza since her birthday was 2 days away. Betty Huddleston brought some of her delicious peanut butter buckeyes, so there was plenty of sugar for all. There wasn’t enough Reviewers in the house to recreate the Reviewer’s Cup challenge, so we cancelled it and I get to carry the title another year. Woot woot!

The Open House lasted for a while as people came and went. I hung on to the bitter end because I was in no hurry to head to my next destination- Dayton, OH. I went out to dinner with Sue and CaJohn before I said goodbye. It was fun while it lasted, and I as always enjoyed their company very much. My drive to Dayton was a little more than 1 1/2 hours, and I got in around the midnight hour at a nearby hotel not far off from where I was to meet Crazy Uncle Jester Jeff Stevenson the next day. For the first time since arriving in Ohio I was alone in my thoughts. Not a pleasant place to be with all the cobwebs and all.

Much thanks to my traveling partner and roommate Ryan who was fun to talk to. I hope your ear drums have healed by now. Thanks for the good time.

I woke up with the excitement to see Jeff and setup the interview. I hardly ever prep for the interview with notes. Instead I go over questions in my mind that I want to ask and think about the flow of where I would like the questions to lead. It probably not the best way to do things, but I have always loved to improv that way I am listening and reacting to the person I am interviewing. When I met Jeff at his place he was meeting with a client who was looking to co-pack her salsa. Something I did not know Jeff was presently doing, and added it to my mental notepad for later. Jeff had his own plan for the interview as well. He wanted to use a restaurant he was presently making sauces for in Centerville, OH called Archers Tavern to be the place where we had lunch and also used for the video’s ambiance. It worked for me.

The food was pretty darn good. I am not one to think fried pickles is anything special, but they made the best I have ever had with dipping sauces too. We had two styles of wings, which were texturally superior to most wings I often have, and the flavors were also quite good. Nothing too hot, which was a surprise for me knowing Jeff loves to make people squirm a little. He also added some sweet potato fries with caramel dipping sauce and the house special peanut burger called the Sticky Burger which also had bacon and jack cheese. It was pretty good as well. Overall, it looks like Jeff latched on to a really good restaurant. The service was very friendly, but it might have been due to Jeff being the welcomed guest in their establishment.

The interview went really well in my humbled opinion. I think it might be the best interview I have done so far, so I look forward to sharing this with you soon. I still have some reviews to squeeze in, so it will be up in maybe another week. Please check it out, I think you will learn a lot from Jeff’s interview, especially some of you up and coming sauce makers. I had a great time hanging with Jeff the whole afternoon. Next stop was Indianapolis for the night.

When I booked my Holiday Inn reservations in downtown Indy, I was not aware that it was literally a stones throw away from the Lucas Oil Stadium, home of the Indy Colts. What a huge place that is. I can understand why the Super Bowl will be held there at the end of this present NFL season. After I checked in I called up Jim Campbell to ask for some ideas for dinner. He told me of a touristy place he takes his friends called the Eagle’s Nest. The Eagles Nest is a revolving restaurant that is at the top of the Hyatt hotel and over looks the entire city. Since it was just a few blocks away from where I was, what the heck. I hit the streets. 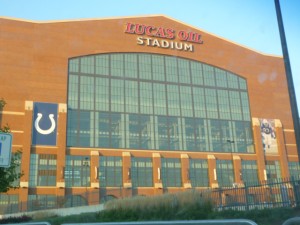 While walking I got a good look at that enormous stadium. It was the tallest stadium I ever remember seeing. I would have loved to have a glimpse inside and see the field in person. It was still a nice view of the outside. The odd thing about it was the USPS post office right next door. I guess they have a need to be there. At any rate, I arrived at the Hyatt about 15 minutes later. When I took to the elevator to the top floor (23rd), I was greeted by the host. I almost gasped when I saw the menu, but I got a reprieve when he told me that if I was there for dinner, I could not be served whilst I was wearing shorts. Well I was not going to go back to my hotel, change just for a romantic view of Indy. I grew up right outside of NY and have seen other big cities like Chicago, I am sure I wasn’t going to find myself bedazzled over my fancy $40 lamb burger and frites. The host suggested that if I liked spicy food, (I got a huge grin), then I should visit Harry & Izzy’s for their infamous St Elmo’s Shrimp Cocktail. I was on my way.

What you see above is the meal I had. I know it is hard to see the shrimp within the heaping helping of cocktail sauce, but let me assure it is there and in giant tailless obscurity. To the right is the spicy roasted red pepper meatballs. They were both appetizers and they both hit the spot. While the meatballs were less than spicy for the mere mortal, the cocktail shrimp was kicked up past any cocktail sauce I have ever encountered in my 45 years of existence. It melted my nose hairs right out of my nasal cavities. Even at that high heat, it was so tasty that you just have to go digging for more shrimp once your breathing returns to normal. It took me a while, maybe 30 minutes, to get through eating all the large shrimp. Not because of their size, but because my brain couldn’t handle the intense onslaught from the cocktail sauce. If anyone is ever in the neighborhood this is a must experience. I wouldn’t recommend the meatballs, they were just average.

It was getting on in the evening when I finally got back to my hotel, so I did some minor video uploading and went to sleep knowing that the Hudd’s, ( Betty & David Huddleston), would be given me a tour of the city the next day.