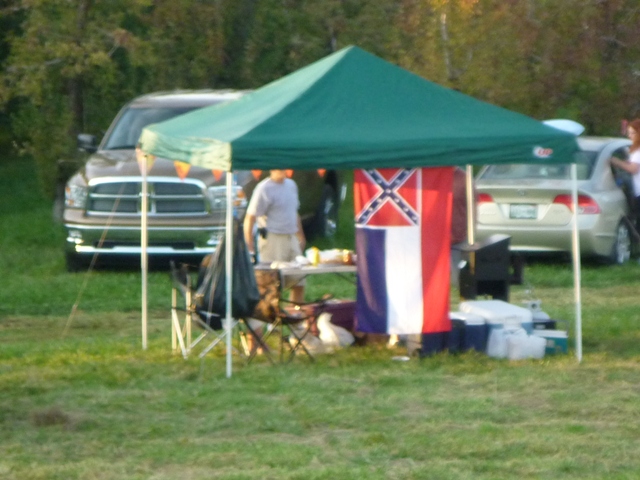 I woke up bright and early, got in the shower by 7am, and was packed up and raring to go around 8am. Jeff and Spam Rob was also, and since Jim and Abby were either still sleeping or preoccupied we would go to Wal-Mart and pick up some necessary stuff before arriving to the fields. There is about a 30 minute drive to the fields, and there isn’t much to obtain locally, so it is best to use the local Franklin, IN stores like Wal-Mart before you head there. It isn’t remote remote, but you really do not want to leave the fields unless you feel a huge need to. I was going to make some BBQ meatballs, so I needed to grab my balls and put them ice. I also found some new Buffalo Velvetta, so I took that too in hopes to melt some queso with some salsa I had bought from Jungle Jim’s. On my way there I thought chicken would be a better add being it would be Buffalo flavor, so I stopped off at the last stop CVS store, and got me a couple of cans of chicken. I am probably the first customer that has ever bought that item there, but one never knows being it was in the middle of Nowheresville. 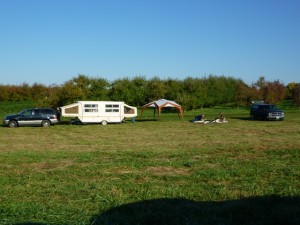 I got to the fields around 9:30-10am. I saw just the campsite of the three amigos(Harry, Vic and English Robert), pictured above left. Jeff and Spam Rob were casually get things together. That is them to the right when they finally decided to get their stuff unraveled. The Three Amigos were all at work setting up for the some breakfast. Harry was roasting peppers, Vic was making a frittata, and English Robert was cooking up some bacon, sausage, spam (provided by you know who) and hash brown potato sides. Someone made biscuits too. I brought out a couple of jars of CaJohn’s Macioce Italian salsa that I bought at Jungle Jim’s and added it to the feast. It was really good on Vic’s frittata as seen below, next to the Spam and meat. It was a running joke to say Spam and meat because Spam was a food group on it’s own. 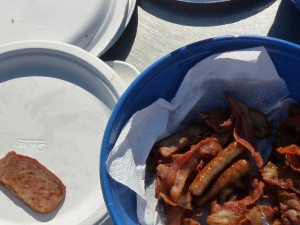 As people started to arrive and pitch their tents up, you find out really fast how people will keep making food the entire time you are there. You can get fat camping that is for sure. Being this is a chilehead gathering you would expect to get really burned up with all the dishes being served, but only a few were heavy handed on the heat. MY spicy p.b pie was one of them, but it was much liked by the consensus of the gathering when I brought it out, and there was people coming back for more forkfuls. I provided forks for portion size because I wanted to have as many try it as I could and because I didn’t want to hurt anyone. I only produced a few tears doing it that way. 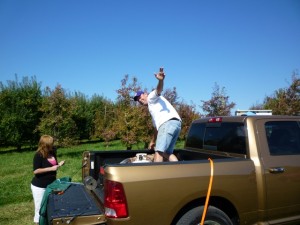 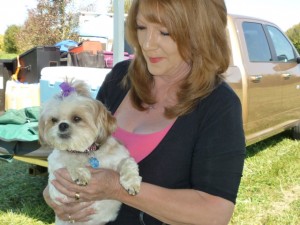 Everyone got a big smile on their face when Butch T(aylor) arrived. Out came his lovely wife and a small foo-foo dog as well. Not with camper this year, but he came packing some serious frying apparatus and seafood. He also claimed he was going to cook up some gator for the big Florida vs LSU game on Saturday. Their dog had it’s paw nails painted purple and gold for their LSU pride. Go figure a guy named after the hottest pepper in the world has a super high maintenance foo-foo dog. That should have been mentioned on that Hairy Bikers show. 😈 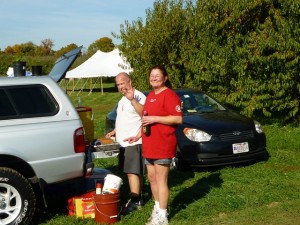 Some of my chilehead posse started to show as the day progressed. Bill and Sandi were the first of them. Some of my first blogger friends, as we go back to the HotSauceBlog days. I have always thought of Bill as the macho fatherly advice type who always tried to get me to do things the right way when I strayed from the correct path. A year and a half ago when my area was hit hard by winter snow storms, I told him that my snow shovel broke and I had a hard time finding a replacement during winter. He insisted that I take his super shovel over the cheap plastic ones I was using. It was more suited to dig out a tractor trailer than a driveway, but I did use it a few times to dig my tires out of the ice. I think the thought of drinking one of my umbrella fruity drinks irks him more than the economy. This year he took one look at my foo-foo grill and insisted that I use his grill instead. I am too stubborn though, and if I am going to invest in a $12 grill, by golly I am going to use it. As for Sandi, she is more of the crazy Aunt who always has a good recipe to share and likes to talk just as much as me. I am going to get hit next time for that last comment, but she knows I care. They also offered me a spot in their spacious tent, but I was con-tent in sleeping in my car.

The other members of our krewe were all due to arrive on Saturday, so I wasn’t sure about cooking up my meatballs on that day or Saturday. I also wanted to make them for the three amigos who were going to leave early Saturday, so I decided to make one bag of balls each day so more people had them than didn’t. I got TATS to send me one of my new favorite BBQ sauces in the world, their Black Dahlia. It is a cherry flavored ghost pepper BBQ sauce. It balances the sweet and heat just the way I love it.

So despite Bill pleading with me to forgo my foo-foo grill and use his, I had to try and cook my balls my way. I will admit now that I was a bit worried that the grill was too hot and I was afraid the meatballs and sauce would burn before cooking all the way through. I stayed on them the whole time making sure they were constantly mixed. When it was all said and done, I was pleasantly surprised at how well they came out. I think Bill did too, although he didn’t want me to know it. I passed my saucy balls around like a proud Papa, and the reactions were what I was looking for. I want to thank Derek of TATS Sauces and Marinades in providing me their great sauce for this event. Here is their link, I do encourage you to check them out and some of their other great sauces too: CLICK ME

As I went around to share with others, I also got more food shoved down my gullet. It is crazy how much food is being shared. Some great stuff too. It is hard to remember what I ate on Friday and Saturday, but I didn’t spit out anything. Thanks to everyone who shared. I also passed some of my watermelon salsa and some peanut butter pie. I was very happy with the feedback. It was a goal of mine to contribute more than I did last year. I think I represented well and I put a few smiles on some faces too. I totally envy chefs because they live off their customers’ feedback. I love sharing the little things I can cook and/or prepare right.

As night crept into the fields, Jim Campbell started up the campfire. Soon people were gathered around the fire trying to stay warm as the temperatures quickly dropped from the 80+ degree afternoon to the 50’s at night. Every time a new chunk of food was tossed into the fire pit, the blaze would rise as would the heat. Then if you were too close, you had to scoot your chair back a bit. After a while I got tired of moving back and forth over the course of a couple of hours. I decided that I could handle the extra warmth and stayed put. Eventually the heat of the fire cooked my skin and I was left with some burn marks across my legs that i didn’t realize I was getting until I scratched my leg and some skin peeled off with my finger nail. I looked down and saw the mess that I had made. I have such a high pain tolerance from all the hot stuff I eat, that I guess I let it cross over to other types of burn. It didn’t really hurt, but the look of my legs, even two weeks later is a bit scabby.

I had some sunburn aloe with me so I rubbed some on and I was ready for bed or at least my reclined car seat. Bill and Sandi were all ready tucked away in their tent so I tried to be as quiet as I could. I made sure I plugged my phone into the charger so I had a full battery in the morning. My Sister is due baby, still due as I am writing this, but I wanted to make sure I had a way of getting in touch with me if need be. I tilted the seat back, pulled over my blankie up to my chin and was off to dream land in no time.

How to Create a Chilehead