Okay where do I start? I got in too late last night for the large turn out at the Meat ‘n Greet at the Chile Pepper Magazine Headquarters. There was a scattering of people still hanging out there so I scooped up Shauna & Derek Jellsey from TATS from their hote and drove on over. I got to munch on the last boudin sausage that Tracy Carter from JACS Taigaters made. The rest of the goodies were gone, but that boudin sausage was so freakin’ awesome. The company made up for the lack of munchables.

After hanging for a little while we made our way back to the hotel and got treated to some awesome chocolatey sweets from my roomies, Madison Chocolatiers West, as Ricky & Renee brought out some for the small group still hanging out. They have this fig chocolate thingy that rocked us all. I might have to sneak some when they are asleep.

I woke up early to get to the event center and organize the salsa contest. We had a total of 57 salsa to judge. It was a huge undertaking for all of us. All 6 judges got lit up from at least 1 or more of the salsa. It was funny to watch Grape Nut, the face of the Snowdrop Foundation, do the burn dance a handful of times as some of the salsa was a tad out of his heat level. He loved it though, as did I. We had some great flavors, including a ginger one I loved from Global Warming Salsa.

Once that was over, and that took a long time, I started to walk the show a little, sampling some great products, but mostly reserving that for tomorrow morning because the crowds were too big. A great sign of course for a good event. I got lit up a few times, but got some great flavors along the way. I then after a good amount of sweat from both the hot temperature and then the hot sauce, I entered the Intensity Academy Lick-a-Thon. I donated $50 + $10 per person for whomever beat me. Well despite trying really hard to win, I had 3 people beat me. I added in another $20 and made it a $100 donation to Snowdrop. If I was going to lose I might as well make it a positive lose. Oh by the way, the winner…Vic Clinco. Grrr! That guy owns me. I am officially retiring and making a Clinco shrine, the Lord of the Lick-A-Thon. He truly sucks like no one else I know. Love ya Vic. Props!

I met CaJohn over at the Chocolate covered Frozen Cheesecake stand and got us both one on a stick. I did something I am not supposed to do and drank a frozen lemonade at the same time, and the cheesecake got stuck in my lap-band tummy. For about 10 minutes it was a bit uncomfortable then it wanted to come out. I made my way to the bathroom and let loose. Thank goodness there was no burn, only a lemonade-enhanced cheesecake chunk. My show was over after that, and came back to rest and blog here.

Now I await the after show BBQ dinner and award ceremony. We will announce our salsa winner and a special couple of awards too which I will tell you later. For now that is all I am saying. Be back later to add to this.

I presented a few awards, not just the salsa contest. I started with the Feast Your Eyes on This Spicy Cooking Challenge winner, Shauna Jellsey from TATS Sauces and Marinades. I will share pics when I can. I got the biggest award I could get with flame towers, and it really is an eye-catcher. I gave it to them during the show to draw attention and Shauna told me people were definitely drawn to it and inquired about it. Good stuff.

The next 2 awards are dedicated to my Dad, Leonard “Lenny” Goldenberg, who always helped people when he could. These heart-shaped trophies were dubbed “The Lenny”, and I gave them out as the best of the year in spicy products awards for the last 2 years. Last year I created a special award to honor “Contributions in the Chile Community”. The 1st 2 deserving recipients were CaJohn Hard and Bwana Bret Vitek. This year I gave out 2 more at the Houston Hot Sauce Festival. The first one I had CaJohn come up and say a few words about because without his help in mentoring him, CaJohn might not have been the successful sauce maker he is today. The Lenny goes to the very deserving Jim Campbell, who now writes for Chile Pepper Magazine, educating us in his knowledge of chile peppers and hot sauce. Jim is the man behind Open Fields, which people refer to as the Woodstock for Chileheads. People from all parts of the globe flock to Indiana to participate in the sharing their love of the chile, camping out and cooking for days. Jim grows chile peppers and shares his field there with all that make the trek. He spends the time and money each year and even gives up his house for those that come but do not wish to camp out at night in the cold fields. His generosity is endless, along with wife Abby, their hearts are huge with kindness. We all are better people to have crossed the Campbell’s path. Jim your humble speech only cements why you are so deserving of this honor.

While I had Jim up there I had him present the next Lenny whom he has been lucky enough to be associated with through the Houston Hot Sauce Festival a little shy of a decade. The next Lenny was awarded to one of the best hosts in the chile festival community, Carol Borge. Over the last 13 years, Carol has taken an unknown hot sauce event and turned it into an event to be reckoned with. She has gone through many trials and tribulations, but to see the attendance on Saturday, success has come full circle for the Houston Hot Sauce Festival thanks to Carol and the great people she has surrounded herself with. There was even a year that the show was cancelled a few years back, but it returned in big fashion, in a new venue and the following has grown and grown. Vendors make money and the chileheads leave heat-filled and satisfied. She walks the show to make sure everyone is happy and satisfied. I reached out to Carol to see if she would sponsor the ILIS Feast Your Eyes on This Spicy Cooking Challenge and she thanked me instead for allowing her show and herself to be apart of the experience. She gave up time to judge and so generously donated a free booth to the winner which is why Shauna of TATS was able to attend with her hubby Derek. Carol helped me too with the salsa contest to help raise money for the Snowdrop Foundation, a charity that she has supported for her show to help raise money and awareness for the fight against Children’s Cancer. Carol is more than deserving of the Lenny as is Jim, and I was happy to be able to bestow the honor to them.

Once those pleasantries were over, I awarded the salsa awards. We had almost a 50-50 split of submissions that were from the show and those that shipped to the show. Thanks to all for supporting our contest to raise money for Snowdrop. 4 out of the 6 awards given out were at the show. The grand champion and runner-up from the fruit-based salsa category were both outside the show. Here were the results:

After the celebration was done and our tummies were filled with some amazing BBQ as well as some of the best challah bread ever, we made our way back to hangout once again at the hotel. The highlight of the night was watching Jim Campbell translate the conversation between Chile Pepper magazine’s Rick McMillan and Horrible Haggis from Australia. Now that was some funny stuff. Those that do not know Haggis, he is one of the more colorful people in the Chilehead community. He has a big spicy annual event coming late March to Melbourne that is going to bring in huge crowds by combining hot rods & hot sauce. Australia chileheads are huge in numbers and they really have supported this show over the years. So if you want to make a big splash in Aussieland Haggis will make sure you are treated like royalty.

That is it for day 1. Day 2 looks like it will be a wet one, but I have high hopes that the crowds will still come out as they did last year. Time will tell. Thanks folks for tuning in. 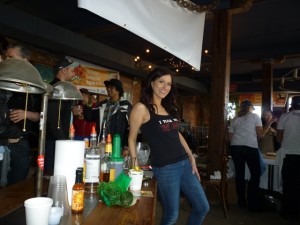