Anyone who appreciates the zesty things in life is invited to indulge in a flavorful food experience June 28-30, 2013 as ZestFest Midwest brings together spicy exhibitors and tasty products from around the country for one exciting weekend in Columbus, OH. Featuring hot sauces, barbeque sauces, salsas, spices, condiments, snacks, sweets — specialty foods and beverages of all types to tantalize your taste buds.

ZestFest is the ultimate party for food enthusiasts. Produced by Spicy Food Productions, ZestFest Midwest will be action-packed! Cooking demos by celebrity chefs, live music, interactive contests and delicious foods and beverages to sample and purchase will make June 28-30, 2013 the zestiest weekend of the year!

Michael Isenberg to appear on the Zestfest Celebrity Chef Stage

Join Mike Isenberg to open the Zestfest Midwest Celebrity Chef Stage for the I Love It Spicy ‘Feast Your Eyes On This’ award presentation and cooking demonstration.

Winner of the 2013 ‘Feast Your Eyes On This’ spicy cooking contest, Mike went head-to-head with 7 other fantastic competitors in a chilehead video cook-off.  This amateur, self-taught home cook will bring his passion for all things spicy to the stage to demonstrate some of the flavors that helped secure the trophy.

Mike Isenberg is the co-owner of Wicked Cactus Sauce along with Chris Bintz, 2012’s runner-up in the ‘Feast Your Eyes On This’ challenge.  Based out of St. Louis, MO, Wicked Cactus Sauce produces sauces in small batches to ensure quality, freshness, and of course HEAT!  After the demonstration, make sure to stop by booth 1102 to sample all of the great products Wicked Cactus Sauce has to offer. 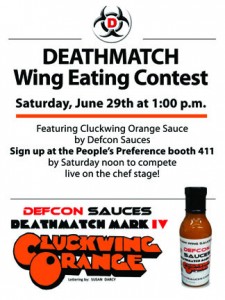 Yup, Defcon’s newest product, The Cluckwing Orange, is now available to the masses. It’s is the latest addition to our Deathmatch competition wing sauces line. It is a glorious combination of a variety of peppers, including the Trinidad Scorpion, Peri-Peri, Habanero and Cayenne. Originally unveiled at the Bowers, PA chile pepper festival on September 7th, this little gem has received numerous rave reviews thus far. This stuff packs a very healthy punch, and, in my opinion, is the best tasting Deathmatch product we’ve released so far.

Bumblefoot has over 20 years of releasing music, international festivals & headlining solo tours, and many ‘Album Of the Month/Year’ awards and front covers of music magazines. Bumblefoot’s latest releases were an innovative digital song-a-month series that include transcriptions and backing tracks for guitarists and recording stems for re-mixers, including a cover of “The Pink Panther Theme” featuring members of Guns N’ Roses. Lead guitarist of Guns N’ Roses since 2006, Bumblefoot has toured sold-out shows in over 50 countries, headlining festivals with crowds of 150,000. Bumblefoot’s unique ‘fretless guitar’ can be heard throughout GNR’s Chinese Democracy album.

Bumblefoot has collaborated as a songwriter/producer with many artists, his music often heard in TV, film and videogames including theme songs to SpikeTV’s “MXC” and VH1’s “That Metal Show”, So You Think You Can Dance, Oprah Winfrey, ESPN, UFC, WWE, NFL, dozens of MTV/VH1 shows and more. Bumblefoot has appeared on stage with Joe Satriani, Nancy Sinatra, Blue Oyster Cult, Chris Jericho, Cyndi Lauper, and on diverse recordings with Dream Theater’s Jordan Rudess, Jessica Simpson, rapper Scarface, comedian Don Jamieson and many more.

Studying music since age 7, he began teaching at age 13 and for the last 10 years has taught music production at SUNY Purchase College. He teaches master-classes at schools and venues around the world, and has been a guest music coach on MTV’s “Made”. Bumblefoot is continuously donating songs and performances to fundraising CDs, often making appearances and donating autographed items for charities. He often performs at events for medical research, disaster relief, and children’s health issues, visiting patients at children’s hospitals all over the world with guitar in hand.

Plans for 2013 include the release of Cajohns/Bumblefoot hot sauces http://bit.ly/bumblefkd and an upcoming line of Bumblefoot guitar cases.

ZestFest Midwest Sunday at 4pm
Brimstone has had a successful and rewarding career participating in and administering numerous entertainment careers spanning well over three decades – boasting a list of titles including professional wrestler, actor, author, philanthropist, food critic and comic book/animated/video game/children’s book hero. As a child actor, he made appearances on iconic pop culture shows such as Sesame Street and Romper Room; later becoming best known for his career in professional wrestling where he has made countless appearances worldwide for the leaders in sports entertainment and throughout the Independents. As the co-founder, President and CEO of Hound Comics, Inc.(Hound Entertainment Group), Brimstone and his team of creators launched his comic book series, Brimstone and The Borderhounds on October 31, 2010 at Borders Books and as of January 11, 2011 went nation and worldwide via Barnes & Noble, B.Dalton, BN.com and Amazon. The Borderhounds brand has since expanded with a variety of Brimstone branded products including but not limited to the “Border-Pups” children’s book series, coloring books, video games, plush toys, and the Animated Series. Furthermore, under the leadership of Brimstone, Hound Entertainment has also expanded tremendously and aggressively over the course of 2012 and 2013 with the addition of publishing over thirty different creator-owned projects between the brands Hound Comics, Hound Publishing and Hound Kids. Brimstone is currently involved in licensing and partnerships with Eastsport Backpacks for Brimstone branded merchandise and CaJohn’s Fiery Foods (Brimstone & Food Hound: Tidbits lines of award winning gourmet sauces and seasonings) and is endorsed by Bulky Boy Brand Clothing, Monster Energy, Yelp and Club Fit 24/7. He has been featured in Wall Street Journal Best Selling books The Bra Book and Worth Every Penny. Brimstone also stars as the host of Food Hound: Tidbits which is currently in its third season. The Food Hound series is a web-based celebrity food show filmed while on tour making appearances at pop culture conventions around the country including events such as Wizard World and New York Comic Con. As a result of the show – restaurants around the United States have added Brimstone branded products to their existing menus including The Brimstone spiked milkshake at My Burger Bar in Buffalo and a variety of Brimstone related dishes at Times Scare NYC. On top of his grueling schedule, he selflessly acts as a celebrity spokesperson for the Project Meridian Foundation, Jaime Isaacs Foundation and RADD (Rockers Actors and Athletes against Driving Drunk) and aspires to be cast as a contestant on the Celebrity Apprentice to raise money and awareness for his chosen charity. Brim claims that the cherry on top of his successes is the signature drink “The Brimstone Red” created for him by the Jack Daniel’s Distillery, recognition of his philanthropy on MSNBC, and the spotlight on himself and Hound via the legendary Stan Lee’s official website.

ZestFest Midwest will be open on Friday, June 28 from 1pm to 9pm, Saturday, June 29 from 10am to 6 pm and Sunday, June 30 from 10am to 5pm. Admission includes food and beverage sampling, competitive eating contests and all of the Celebrity Chef Stage cooking demonstrations. Tickets are available in advance and get a discount at www.zestfestmidwest.com $10 for Friday and $12 for Sat and Sunday plus a $2.00 Box Office fee and will also be available at the Ohio Expo Center Box office day of show. Children under 12 are free.
Can’t make the show, but want to get some swag?  Here is a t-shirt from the event you can buy online.  Just click the pic for details.  $20 and it can be yours!