SAVOR THE FLAVOR AND FUN OF TEXAS’S OWN

SPICY FOOD FESTIVAL TO START OFF THE NEW YEAR

The Irving Convention Center Once Again Hosts this 12th Annual Spicy Food Festival that Draws Tens of Thousands in Search of the Hottest Foods and the Coolest Culinary Tools, Recipes and Instruction

(Irving, TX) – In the cavernous confines of the Irving Convention Center, you can find the boldest, and, at times, the bravest of foodies – the ‘Hot and Spicy’ connoisseur. And for this certain type of palette,  ZestFest  is the mecca for all things flavorful, spicy, hot, extreme, and just plain “zesty”. From sauces to salsas, recipes to remedies, the whole ZestFest experience is built around the idea that “if it makes food taste great, then it must be good”.

Now in its 12th year, the festival, produced by Spicy Food Productions and presented by NBC and The Dallas Morning News, has steadily grown from a niche gathering to a national event, all under the watchful eye of ZestFest owner Greg Bagarozy, who is excited about a new feature of the show.  This year ZestFest will have a Crawdad boil on Saturday night from 6pm – 9pm. Attendees can eat, listen to music, check out all of the show offerings, and have more time to experience all things Zesty.  More details to be announced soon.

What makes ZestFest so compelling is the massive number of companies that deal in the hot, flavorful, and spicy industry- from local homegrown start-ups to international brands. And it’s not just the consumers who are coming here to sample the wares- it’s retail buyers, restaurant owners, and the searching  palates of some of the country’s best chefs.

Speaking of which, another ZestFest attraction- besides foods, spices and libations (to help put out a bit of the sizzle) is the country’s top chefs who conduct fully interactive cooking demonstrations. 2014 is no exception as chefs- the likes of John Bonnell, Eduardo Alvarez, John Frank, Enam Chowdhury, and local legend Eddie Deen- show off the skills that have made them renowned in their field, all performed in full cooking glory on the Celebrity Chef Stage located in the convention hall. And like any food festival, ZestFest is ripe with competition, from hottest dishes, to most original spices, as well as contests sure to burn the roof of your mouth, including the “Wingstop Atomic Wings Eating Contest” and the “Jalapeno Eat-Off”. On the other hand,  there will be flavorful offerings for those who love spice rather than heat.

The weekend, which is extended due to popular demand, will now open on Friday, January 24th at 1pm and run thru Sunday, January 26th (times available at www.zestfest.HYPERLINK “http://www.zestfest.2013.com/”2014HYPERLINK “http://www.zestfest.2013.com/”.com).  Also included will be live music and continuous demonstrations and exhibits throughout the weekend. Tickets are currently on sale at the aforementioned website and the Irving Convention Center at Las Colinas box office. Price of admission covers all exhibits, competitions, and entertainment, and children under 10 are admitted free with a paid adult ticket.

So bring the family, come in from the cold, and prepare to taste some of the hottest and most flavorful foods from around the globe. 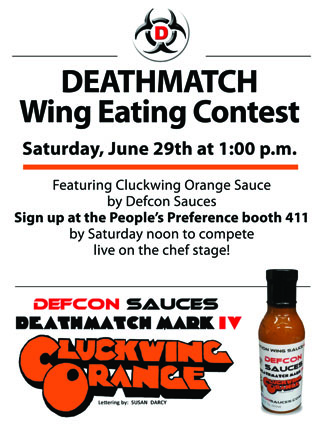