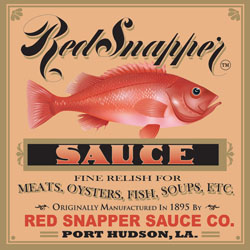 The story of Red Snapper Sauce and the history of the McVea family are essentially one and the same. Some of our family’s happiest memories have been made while gathered around tables stocked with our Louisiana-style hot sauce. The most popular events have always been our gumbo parties. What’s not to love about friends and neighbors stopping by to help themselves from heaping pots to an all-you-can-eat homemade gumbo feast? In between bites and laughter, the discussion always seems to turn to the legend of the sauce. Since we can’t invite each of you to our table for a meal and some conversation, we’re sharing the history of Red Snapper Sauce with you here, so you can feel a bit of the family pride that goes into each and every bottle.

Harris McVea and His Famous Sauce

The McVea family emigrated from Ireland to Louisiana in 1820. It was there, in 1870, that Harris McVea was born at Wildwood, the family’s plantation in Port Hudson, Louisiana. Harris’s parents Thomas and Armina McVea welcomed their new son to the world just five years after his father finished fighting in the Civil War. Harris McVea was one of six children. He attended Chamberlain-Hunt Military School in Mississippi, went to Louisiana State University, and later moved to Baker, Louisiana where he was a part owner of two cotton gins. Harris’s home was the center of social activity for the young people in the community, but his real claim to fame was the hot sauce he made using the essence of boiled, red cayenne peppers, onions, garlic, and a secret blend of spices. Harris likely got the sauce recipe from his grandmother, Mary Lilley Neville, or his mother, Armina Neville McVea, but he’s the one who made it famous. He called it “Red Snapper Sauce” and began bottling and selling it in 1895 from locations in Lindsey and Port Hudson, Louisiana. His hot sauce could even be found in New Orleans.

While business was good, Harris’s marriage was not. Eventually, he decided to leave his wife. Harris paid a local hand to drop him at the train station where he made him promise not to tell anyone his whereabouts. With that, Harris McVea disappeared and was never heard from again. To this day we still wonder what became of Uncle Harris.

The Sauce Must Go On

When Harris McVea left his wife, he also left behind his sauce business. His brother Tom and sister-in-law Grace “Dot” Pettit decided to continue the hot sauce making tradition and began commercially manufacturing Red Snapper Sauce in Baker, Louisiana around 1925. Their youngest child, Coleman (Yo), is now in his 90s, but he still remembers making the sauce in a cooking shed behind their Louisiana home when he was about five years old. In that shed, the peppers were boiled and the essence was extracted (skins and seeds removed) and added to the other ingredients. The sauce was then cooked, bottled, and shipped. After awhile, the sauce became too expensive and time consuming for a small family business to make, and Tom and Dot sold the recipe to a company in Plaquemine, Louisiana with the condition that the McVea family could continue making the sauce for personal use. However, the company compromised the recipe and its ingredients in an effort to make the sauce a more profitable venture. The watered down product distressed Tom and Dot who had always taken great pride in the recipe. Eventually the company went out of business in Louisiana and the sauce disappeared from the public market.

Yo, his wife Eleanor, and many of their descendants migrated to Utah long ago, but the Louisiana Red Snapper Sauce never stopped being a McVea family tradition. It’s still a rite of passage to be taught the recipe, and new generations often learn the secret as we gather together to turn mounds of red cayenne peppers into bottles of hot sauce for our family tables. Friends who taste Red Snapper Sauce have often asked us why we don’t bottle and sell it, and from time to time we’ve toyed with the idea. In the early 2000s, Richard McVea made an attempt to commercially manufacture it, but found he couldn’t make it financially successful at that time. He passed away suddenly without any heirs to continue his endeavor.

Kirsten Poelman is a McVea descendent who was 36 when her grandma shared the secret family recipe with her. She developed a slight obsession with Red Snapper Sauce, and occasionally toyed with the idea of making and selling it. The timing finally seemed right at Christmastime in 2012, and Kirsten dragged her parents, Alan and Ellen Loveland, out of their comfortable retirement and into the hot sauce business. Together, they restarted Red Snapper Sauce Co. to bring our beloved family sauce back to the marketplace. David Hall, a grandson of Yo and Eleanor McVea, designed the current company logo and bottle label. We know Harris McVea used two labels for his Red Snapper Sauce—“Port Hudson” for the sauce made at Wildwood Plantation in Port Hudson, Louisiana, and “Lindsay” for the sauce made a few miles away in Lindsay, Louisiana. The Lindsay label was more colorful and descriptive, and the modern-day label is a reflection of its design.

More Flavorful than Ever

The new Red Snapper Sauce is available in the traditional Wildwood Arbol, Cajun Snapper, and Savoureaux flavors. Eventually, Kirsten and her parents want to expand the line by using Thai and Habanero peppers for an extra-hot sauce. We think Harris McVea would approve.

The reviewers for this are Ken Alexander, Derrick Wood, and Jason Leeks