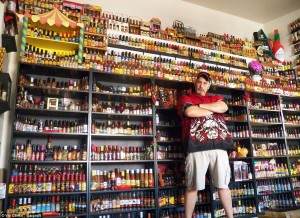 Still got spice for a few more? The chilli fanatic whose house is overflowing with 6,000 bottles of hot sauce

If you can’t stand the heat, get out of the kitchen… but even then you’d be hard pushed to escape the ‘fiery’ surroundings of this household.

Spice-obsessed Vic Clinco is believed to have the world’s biggest hot sauce collection – a whopping 6,000 bottles and counting.

The condiments line shelves, from floor to ceiling, in the dining room of his home in Phoenix, Arizona, as well as being crammed into cupboards and the fridge.

He has been collecting the jars for the past 17 years and is widely thought to hold the world record for a private collection.

His obsession started when his wife bought him 12 bottles as a gift in 1996.

He said: ‘It was simple enough. My wife Wendy had purchased them for me for our first Christmas together.

‘I had lined the bottles up on the kitchen counter and when our friends and family were coming over for the holidays, we would laugh and giggle over some of the funny and crude labels on the bottles – that’s what sparked the obsession.’

Mr Clinco added it’s impossible to put a price on his collection but to him it’s ‘priceless’.

He said: ‘I can’t honestly say how much the entire collection is worth but I know it’s a lot – it’s impossible to put an accurate dollar amount to it.

‘I have bottles made specifically for me and many bottles from companies that are no longer in business.

‘I’ve also got tons of sauces signed or autographed, and many promotional and special event sauces that makes me unable to put a price tag on.’

Among his collection are an extremely rare pair of Adam And Eve sauces from CaJohn’s Fiery Foods and one of his ‘prized’ items is two bottles of Blair’s Calderas (caldera means ‘volcanic cauldron’) that are incredibly hard to find.

This is short for 16 million Scoville units – the measurement used to gauge the pungency and spiciness of chilli peppers.

And, of course, Mr Clinco managed to get his hands on a bottle.

Apparently, there are only 499 bottles in existence – and on specialist hot sauce websites, a bottle retails for almost £3,000.

He said: ‘To put how hot that is in perspective, 11 million Scoville units is hotter than most police pepper sprays in the States – they mostly range from between 2 Mil and 9 Mil.

‘It is actually not even a true sauce, it’s in crystallised form. And that’s pretty darn cool.

Mr Clinco also writes for Chile Pepper magazine and is an old pro on the hot-sauce circuit.

He even has his own heat tolerance competition at the shows called the ‘CaJohn’s Execution Station’.

He said: ‘It’s a seven-sauce challenge, beginning at hot and each sauce climbs a little more, getting hotter and hotter as it goes.

‘The challenge is to make it from level one all the way up to level seven without passing out on me or throwing up on my table – which does happen.

‘It’s no joke and most people quit around level number four or five.

‘Only the strongest survive until the end and walk away with bragging rights and is the envy of all their friends.’

Mr Clinco, who gave up a career in retail after 23 years in order to properly pursue his passion for spice, said he believes there are still ‘hundreds of thousands’ of bottles still to collect because the industry is constantly growing.

He added: ‘I’m not a hot sauce producer or manufacturer, I consider myself a voice, an educator of the industry I love so much.

‘As the industry grows, so does my collection – it’s that simple.’

This man has the largest collection of hot sauce, but at the show it is his job to blow peoples heads off at the execution station and you can tell he loves doing it.

The Trail Of the Trinidad Scorpion “Butch T” Strain