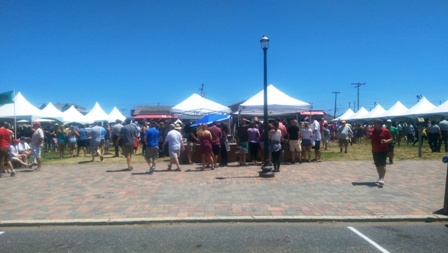 The weather could not have been any better for an outside beach event. The best attribute about this festival is that this is a tourist area that brings in a very young clientele. They do not seem put off by trying new things and with the added liquid courage, they seem intent in trying it all. With only 18 hot sauce vendors, and with no desire to drink the hops I was only going to truly enjoy myself if I got involved in some way. Seeing that Austin D’Almeida from Jersey Barnfire, Johnny McLaughlin from Heartbreaking Dawns, Steve Seabury and eventually Lisa Seabury who came later from High River Sauces were working their booths solo I decided to help them briefly during a busy time of the Festival. I took turns at each booth and I totally had a blast shilling spicy products. Mind you the only time I witnessed it slow was in the last 45 minutes of the event. My favorite part of the event was definitely working those booths, but meeting and talking to my vendor friends is always a highlight whenever I attend these events.

I can’t speak on the “Hop” angle of the event, but the food from some of the local restaurants were pretty good. I got a fish taco from “The Swell” and doused it in the Heartbreaking Dawn’s Fervor Reaper Chile Sauce. That got me the endorphin rush I was looking for. As I noted in the preview I posted prior to this event, there was quite a lot of chow, including chow-da, crab cake sliders, pork belly sliders, wings, and a lot more. They has something for everyone. I think they could have used a stand just serving non-alcoholic refreshments. I personally would have loved a frozen lemonade stand which I would have totally gone for in the heat of the day. A few vendors did have some drinks, but still would’ve loved a separate area just to get that.

Another food item which was a sponsor of the event was Kettle Brand Sea Salt Potato Chips. Their small bags were EVERYWHERE! Every hot sauce vendor had them. I never seen so many potato bags in my life. These are also some tasty chips too if you have never had Kettle Brand potato chips before. While they fed the masses, this might be not the best sponsor for this event. Salt tends to make people drink more, so you might get an over imbibing of the suds. Perhaps not, but since everyone was eating them, could these little fried spud slices have taken money out of the pockets of the restaurant vendors? Not to mention there is nothing a hot sauce vendor wants less than to have a possible sale use their condiments on something salty. I witnessed an all day sampling frenzy of hot sauce on potato chips. How many people use hot sauce on potato chips in the comfort of their own homes? In my time working the aforementioned booths I practically forced mini-tasting spoons upon the public. I explained to the Jersey people that they would better enjoy the deliciousness of the condiments without the sea salt snacks. I do not know if it resulted in more sales, but it could not have hurt.

Beyond the potato chips and lack of frozen lemonade for moi, this event was fun. I never seen so many smiles in one spot since they showed the arrest picture of Justin Bieber at the Metallica concert. I loved when people bought food from the restaurant vendors and brought them over to a spicy product vendor to pour some hot sauce on it. People also seemed to be right at home on the grass or beach chairs in front of the concert stage. I do not think the music was too loud so it worked well. I had no issues hearing people, so they had the sound at a perfect decibel level. There was plenty of space to move freely. A thought to expand and use up these areas crossed my mind, but I think the festival organizers are very happy to leave it the way it is. The vendors I spoke to seem to be very happy with the money they made, and some seemed like a 2nd day would be an ideal way to make the trip to the Jersey Shore even more successful. The show organizers Regina Lotito-Starin and Dan Starin seemed like 1 day is more than enough. Hopefully they will reconsider this as their festival grows out. A big thanks to them for giving me a free pass and feel like a part of the family.

I made a couple of spicy peanut butter pies for people to sample. A big thanks to Dan for letting me refrigerate it at his Spice It Up store, which is conveniently located outside the fence of the festival. At mid-show I passed the pie around and was asked by a few to post the very easy recipe. So here it is:

You heat the cream cheese and PB in a pot on the stove top. Blend them together and once they are one color, turn the stove off, but leave the pot on the stove top. Now add the powder sugar and Cool Whip. Mix everything together and once it is a nice liquid cohesion you are ready to pour the PB goop into the pie crust. Stick in the fridge for a minimum of 3 hours so it settles and dive right in. You can garnish it with whatever your heart desires, but the pie is good as is. You do not have to make it spicy if you wish to show off your dessert skillz to non-Chileheads.

When I attend these fiery events I like to mention some of the new products I walked away impressed with. I did not just walk away, but I bought some too. There were two companies in particular. The first was Hank Sauce. Simple flavors, nothing too spicy, but something I really liked. While I bought 3 of their sauces, the Cilanktro version was my favorite and I bought 2 bottles of that one. There sauces are the type that I grew up with, cayenne and vinegar-based hot sauces, but they had a touch of spices and herbs that made them stand out for me. Anyone who loves these style and cilantro would totally go for the Cilanktro sauce.

The other company I want to mention is Messy Brine. They had these amazing Bread and Butter Rye Pickles. When you have one of these and you are from the NY-NJ area you think of the old fashion Deli Sammich. How good would one of these be inside or along the side of a good reuben sammich? I would totally add these slices to any burger. I love rye bread, and now I love rye pickles, the first time I ever encountered this style. I heard people rave about their cauliflower sauerkraut, but I have sworn against eating baby brain looking food since I attempted a diet where they were the star treat. Blech, never again! So I can not speak of how good this particular item is, so if you want to try some, that is on you. I do say, if you love Rye Bread and Pickles, you should so order these pickle chips.

The after party was just a few of the vendors hanging out with the show organizers, Regina and Dan. A great way to vent off some steam for a job well done. I never got to speak with Graham and Lindsay Connolly from World Famous Hot Sauce before, and sat next to them at the restaurant for a late dinner, and I loved the conversation. They are very fun people to hang with. On the other side of me was David Letterman, (not the retired talk show host) from Bonfatto’s Wing Sauces and Marinades and we been friends for years, so it was great to catch up on the latest with him. Austin and I were sharing a room and Steve Seabury was staying at the same hotel as we were, so we hung out a bit late into the night with the Starins and company. It was a blast and a memorable Saturday night. Good people, good times. I slept more when I got home than I did at the hotel room because we were up early, so hence why I am a little tardy finishing this up. At any rate, this was a good time and I recommend it for everyone. Even if you do not wish to drink or hang out tasting hot sauces all day, you always have some great local bands in a live concert setting and awesome cuisine. There is also an amusement park right next door and the beach of course to cool yourself off. Fun fun! Thanks for reading and sorry for the lack of pictures. I was having too good of a time and forgot to use my camera. 😀 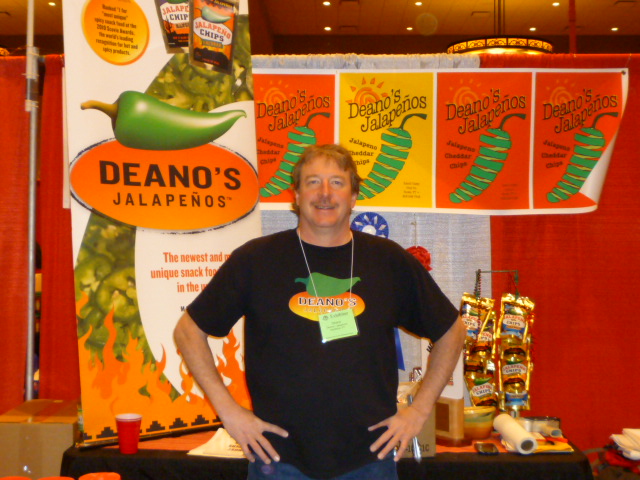