While at the Fiery Food Show Firehead and I met up with Chuck Evans, the man behind the Montezuma Brand. Chuck asked our boy here to review his new BBQ sauce, and Tom was happy to oblige. There is so much you can say about Chuck Evans with his long-lived fiery products company, but how about a couple of facts you might know about him…

Chuck Evans’ MONTEZUMA® Brand, formerly known as Sauces & Salsas, Ltd., is the only remaining, i.e., original exhibitor, at the current fiery food industry trade shows and festivals who participated in the very 1st National Fiery Foods Show ever held. The location was El Paso, Texas where the birth of the fiery foods movement, shows and festivals, began on the weekend of September 9-11, 1988. The ongoing granddaddy spicy foods show; the National Fiery Foods & BBQ Show is produced by Dave DeWitt and his company, Sunbelt Shows, Inc. The original annual mecca for fiery food lovers is held the first weekend in March in Albuquerque, New Mexico.

In 1994, Chuck teamed up with the anointed “Pope of Peppers”, Dave DeWitt, show pioneer and producer of The National Fiery Foods Show, held annually in Albuquerque every March, and publisher of The Fiery Foods Magazine (and former editor of The Chile Pepper Magazine), to write THE HOT SAUCE BIBLE . Published in 1996 by the Crossing Press, and affectionately known as “The Bible”, this reference was THE historical encyclopedia of pepper sauce facts…including numerous pepper sauce recipes from around the world. THE HOT SAUCE BIBLE went to a Second Printing. Eventually, “The Bible” went out of print in 2001 after selling nearly 12,000 copies.

We have news that Chuck and Dave will be bringing back an updated new and old testament of the Hot Sauce Bible. The new testament, which will be Chuck’s baby, will consist of the chile community as it exists today. We will have an announcement soon as Chuck has all the information available to send us. 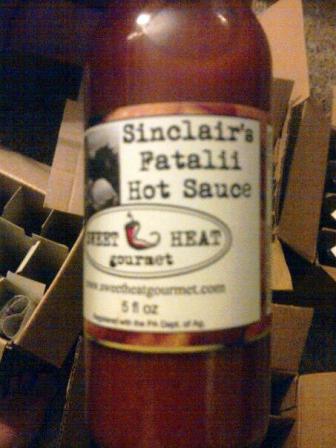